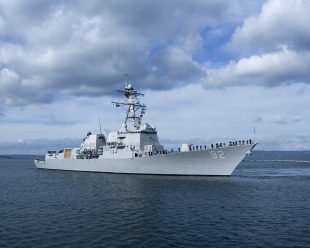 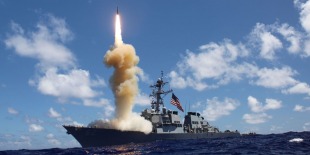 These warships were designed as multi-mission destroyers, able to fulfill the strategic land strike role with Tomahawk missiles; anti-aircraft warfare (AAW) role with powerful Aegis radar and surface-to-air missiles; anti-submarine warfare (ASW) with towed sonar array, anti-submarine rockets, and ASW helicopter; and anti-surface warfare (ASuW) with Harpoon missile launcher. With upgrades to their AN/SPY-1 phased radar systems and their associated missile payloads as part of the Aegis Ballistic Missile Defense System, the ships of this class have also begun to demonstrate some promise as mobile anti-ballistic missile and anti-satellite weaponry platforms, operating on 15 ships as of March 2009. Some versions of the class no longer have the towed sonar, or Harpoon missile launcher. Their hull and superstructure were designed to have a reduced radar cross-section.

The first ship of the class was commissioned on 4 July 1991. With the decommissioning of the last Spruance-class destroyer, USS Cushing, on 21 September 2005, the Arleigh Burke-class ships became the U.S. Navy's only active destroyers, until the Zumwalt class became active in 2016. The Arleigh Burke-class has the longest production run for any post-World War II U.S. Navy surface combatant. Of the first 75 vessels of this class (comprising 21 of Flight I, 7 of Flight II, 34 of Flight IIA, 3 of Flight IIA Restart and 10 of Flight IIA Technology Inserstion), 70 are in service as of May 2022. Currently 14 of the Flight III have been ordered, but another 28 have been envisioned, bringing a total of 42 for that flight and an overall total of 117 ships for the class.

With an overall length of 505 to 509.5 feet (153.9 to 155.3 m), displacement ranging from 8,230 to 9,700 tons, and weaponry including over 90 missiles, the Arleigh Burke class are larger and more heavily armed than most previous ships classified as guided missile cruisers.

The Arleigh Burke-class destroyers have four separate variants or «Flights»

The ships of the Arleigh Burke class are among the largest destroyers built in the United States. Only the Spruance, Kidd (563 ft or 172 m) and Zumwalt classes (600 ft or 180 m) are longer. The larger Ticonderoga-class ships were constructed on Spruance-class hull forms, but are designated as cruisers due to their fundamentally different mission and weapons systems than the Spruance and Kidd-class destroyers. The Arleigh Burke class were designed with a new, large, water-plane area-hull form characterized by a wide flaring bow which significantly improves seakeeping ability. The hull form is designed to permit high speed in high sea states.

The designers of Arleigh Burke incorporated lessons learned from the Ticonderoga-class guided-missile cruisers, which were deemed too expensive to continue building and too difficult to further upgrade. With the Arleigh Burke class, the U.S. Navy also returned to all-steel construction. An earlier generation had combined a steel hull with a superstructure made of lighter aluminum to reduce top weight, but the lighter metal proved vulnerable to cracking. Aluminum is also less fire-resistant than steel; a 1975 fire aboard USS Belknap gutted her aluminum superstructure. Battle damage to Royal Navy ships exacerbated by their aluminum superstructures during the 1982 Falklands War supported the decision to use steel. Another lesson from the Falklands War led the navy to protect the ship's vital spaces with double-spaced steel armor (creating a buffer against modern rockets) and kevlar spall liners.

The Arleigh Burke design incorporates stealth techniques, such as the angled rather than traditional vertical surfaces and the tripod mainmast, which make the ship more difficult to detect, in particular by anti-ship missiles. The ship has an electronics warfare suite that provides passive detection and decoy countermeasures.

A Collective Protection System makes the Arleigh Burke class the first U.S. warships designed with an air-filtration system against nuclear, biological, and chemical warfare (NBC). Other NBC defenses include a «countermeasure wash down system».

The Arleigh Burke class is a set of multi-mission ships with numerous combat systems, including a «combination of… an advanced anti-submarine warfare system (ASW), land attack cruise missiles, ship-to-ship missiles, and advanced anti-aircraft missiles,» An onboard 5-inch gun can attack ships, aircraft, and land targets.

Their Aegis Combat System differs from a traditional rotating radar that mechanically rotates 360 degrees for each sweep scan of the airspace. Instead, Aegis uses a passive electronically scanned array, which allows continual tracking of targets simultaneous with area scans. The system's computer control also allows centralization of the previously separate tracking and targeting functions. The system is also resistant to electronic countermeasures. Their stand-alone Harpoon anti-ship missile launchers give them an anti-ship capability with a range in excess of 64 nautical miles (119 km; 74 mi).

With the development of the Tomahawk Block V, all existing Block IV Tomahawks carried converted to the Block V version and become dual-role missiles with anti-ship capability along with their land attack role. The Tomahawk Block Va version is called the Maritime Strike version, and the Block Vb version features the Joint Multi-Effects Warhead System. This provides Burke destroyers an additional missile for the anti-ship role—along with the Harpoon (which is not carried on the Flight IIA ships). The Tomahawk can be carried in much larger numbers than the Harpoon, and has a much larger warhead.

The Standard Missile SM-2 and SM-6 provide area anti-aircraft defense; the SM-6 provides over-the-horizon missile defense. The Standard Missile 3 and 6 also provide Ballistic Missile Defense (BMD). So vital has the Aegis Ballistic Missile Defense System (BMD) role of the class become that all ships of the class are being updated with BMD capability. The first 28 ships in Flight I and Flight II were upgraded during 2012-2014. Flight III ships will be delivered from 2023 with BMD capabilities and new AN/SPY-6 3D radar, while Flight IIA ships will receive BMD capabilities with a AN/SPY-6 radar retrofit starting from 2022.

Burkes have the Navy's latest anti-submarine combat system with active sonar, a towed sonar array, and anti-submarine rockets. They support strategic land strikes with their VLS launched Tomahawks. They are able to detect anti-ship mines at a range of about 1400 meters.

The class's Light Airborne Multi-Purpose System (LAMPS) helicopter system improves the ship's capabilities against submarines and surface ships, a helicopter able to serve as a platform to monitor submarines and surface ships, and launch torpedoes and missiles against them, as well as being able to provide fire support during insertions/extractions with machine guns and Hellfire anti-armor guided missiles. The helicopters also serve in a utility role, able to perform ship replenishment, search and rescue, medical evacuation, communications relay, and naval gunfire spotting and controlling.

In March 2022, an Arleigh Burke destroyer deployed equipped with an AAI Aerosonde UAS. The aircraft is being demonstrated for Flight I and II ships that have no hangar and so don't have a helicopter permanently onboard. The Aerosonde has a small footprint to be stowed when not in use, and when flying it can perform missions such as ISR at a much lower cost compared to manned helicopters. 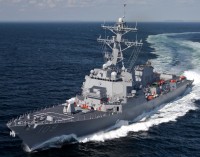 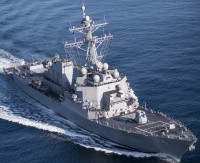 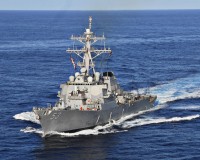