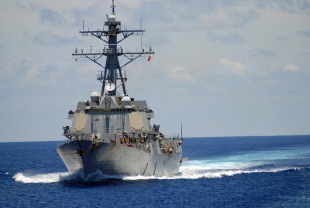 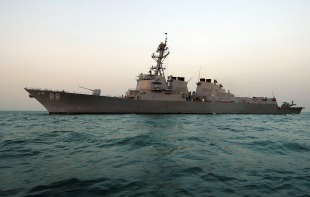 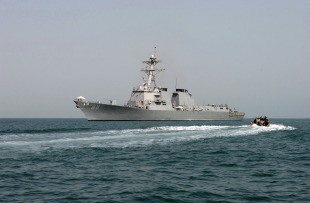 USS Preble (DDG-88) is an Arleigh Burke-class (Flight IIA) Aegis guided missile destroyer in the United States Navy. She is the sixth U.S. Navy ship named in honor of Commodore Edward Preble, who served in the American Revolutionary War and was one of the early leaders of the Navy.

USS Preble is the 38th destroyer of her class. She was the 17th ship of this class to be built at Ingalls Shipbuilding in Pascagoula, Mississippi, and construction began on 22 June 2000. She was launched on 1 June 2001 and was christened on 9 June 2001. On 9 November 2002, she was commissioned during a ceremony at the Commonwealth Pier/World Trade Center in Boston, Massachusetts. At her commissioning ceremony USS Preble was docked bow to bow with USS Constitution, the command of her namesake. The ceremony included a symbolic welcoming aboard of the spirit of Commodore Preble signaled by the ringing of chimes. Among the speakers at the commissioning were U.S. Senator Edward Kennedy, U.S. Representative Stephen Lynch, then Chief of Naval Operations Admiral Vernon E. Clark USN (Ret.) and journalist and sailor Walter Cronkite.