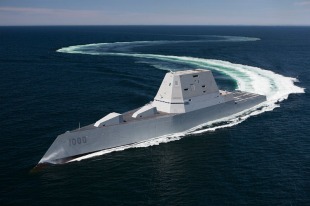 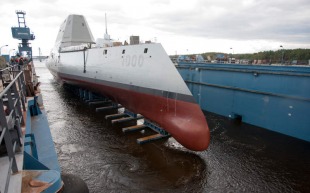 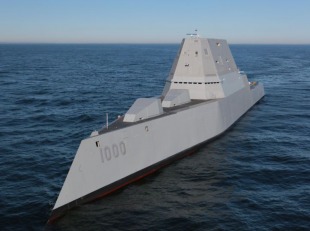 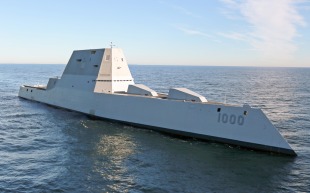 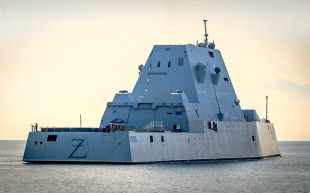 USS Zumwalt (DDG 1000) is a guided missile destroyer of the United States Navy. She is the lead ship of the Zumwalt class. Zumwalt has stealth capabilities, having a radar cross-section similar to a fishing boat despite her large size. On 7 December 2015, Zumwalt began her sea trial preparatory to joining the Pacific Fleet. The ship was commissioned in Baltimore on 15 October 2016. Her home port is San Diego, California.

Zumwalt is equipped with two Advanced Gun Systems (AGS), which are designed to fire the Long Range Land Attack Projectile (LRLAP). LRLAP was to be one of a range of land attack and ballistic projectiles for the AGS, but was the only munition the AGS could use as of 2018. LRLAP had a range of up to 100 nautical miles (190 km; 120 mi) fired from the AGS. It was to be a key component for ground forces support, but LRLAP procurement was cancelled in 2016 and the Navy has no immediate plan to replace it. The Navy has re-purposed the Zumwalt class to surface warfare.

Many of the ship's features were originally developed under the DD21 program («21st Century Destroyer»). In 2001, Congress cut the DD-21 program by half as part of the SC21 program. To save it, the acquisition program was renamed as DD(X) and heavily reworked. The initial funding allocation for DDG 1000 was included in the National Defense Authorization Act of 2007. By February 2008, a $1.4 billion contract had been awarded to Bath Iron Works in Bath, Maine, and full rate production officially began a year later, on 11 February 2009.

In July 2008, a construction timetable was set for General Dynamics to deliver the ship in April 2013, with a March 2015 target date for Zumwalt to meet her initial operating capability but, by 2012 the planned completion and delivery of the vessel was delayed to the 2014 fiscal year. The first section of the ship was laid down on the slipway at Bath Iron Works on 17 November 2011, by which point, fabrication of the ship was over 60% complete. The naming ceremony was planned for 19 October 2013, but was canceled due to the United States federal government shutdown of 2013. The vessel was launched on 29 October 2013.

In January 2014, Zumwalt began to prepare for heavy weather trials, to see how the ship and her instrumentation react to high winds, stormy seas, and adverse weather conditions. The ship's new wave-piercing inverted bow and tumblehome hull configuration reduce her radar cross-section. Tests involved lateral and vertical accelerations and pitch and roll. Later tests included fuel on-loading, data center tests, propulsion events, X-band radar evaluations, and mission systems activation to finalize integration of electronics. These all culminated in builders' trials and acceptance trials, with delivery for US Navy tests in late 2014, and with initial operating capability (IOC) to be reached by 2016.

In April 2019, Zumwalt departed San Diego for a first operational deployment into the Pacific since the shipyard availability conducted in 2017 and 2018. This patrol included a visit to Ketchikan, Alaska, during which Zumwalt's watch teams were able to conduct stability trials in stormy seas (Sea State 6), and Pearl Harbor, marking the first visit of a Zumwalt Class Destroyer to Hawaii. The Navy accepted delivery in April 2020, preparing for more sea tests.