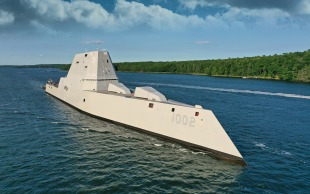 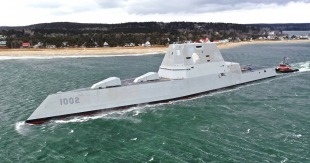 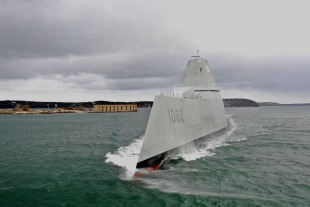 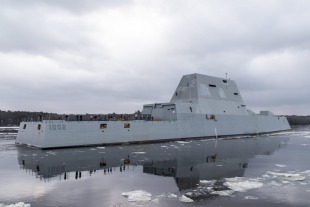 Namesake:
Lyndon B. Johnson served as the 36th President of the United States from 1963 to 1969. Johnson served in the Navy during World War II, he was awarded the Silver Star, and ultimately reached the U.S. Naval Reserve rank of commander
Operator:

USS Lyndon B. Johnson (DDG 1002) will be the third and final Zumwalt-class destroyer built for the United States Navy. The contract to build her was awarded to Bath Iron Works located in Bath, Maine, on 15 September 2011. The award, along with funds for the construction of USS Michael Monsoor, was worth US$1.826 billion.

Lyndon B. Johnson will be a Zumwalt-class destroyer. Although 32 ships were originally planned for that class of ship, the U.S. Navy eventually reduced this number to three units. Designed as multi-mission ships with an emphasis on land attack and littoral warfare, the class features the tumblehome hull form, reminiscent of ironclad warships. In January 2013, the Navy solicited bids for a steel deckhouse as an option for Lyndon B. Johnson instead of the composite structures of the other ships in the class.[15] This change was made in response to cost overruns for the composite structure, but due to the tight weight margins in the class, this required weight savings in other parts of the ship.

In February 2015, the Navy revealed they had begun engineering studies to include an electromagnetic railgun on Lyndon B. Johnson. The Zumwalt class has been identified as more suited to use emerging technologies, like railguns, due to its superior electricity generation capability over previous destroyers and cruisers at 80 megawatts; Lyndon B. Johnson specifically was being studied because it is the latest of the class, while the previous two ships would be less likely to initially field the capability due to the testing schedule. The railgun would likely replace one of the two Advanced Gun Systems. By March 2016, construction had become too far along to install the railgun during building, but it can still be added later.

In September 2015, it was reported that U.S. Department of Defense officials were considering terminating funding for Lyndon B. Johnson prior to her completion. Although considered as a cost-saving measure, cancelling the third Zumwalt ship at that stage was likely not possible, and might have ended up actually costing more after paying program shutdown costs and contract termination penalties. By December 2015, the Pentagon had decided in favor of keeping the ship.

The ship's two AGSs can only fire the LRLAP round. LRLAP procurement was cancelled in 2016, and the Navy has no immediate plan to replace it. As such, the guns cannot currently be used and the ship cannot provide naval gunfire support. The Navy has re-purposed the Zumwalt class to surface warfare.

The ceremonial keel laying of Lyndon B. Johnson took place on 30 January 2017, by which time construction of the ship was over half finished. The ship was launched in Bath, Maine, on 9 December 2018, and christened on 27 April 2019, by Johnson's daughters, Luci and Lynda.