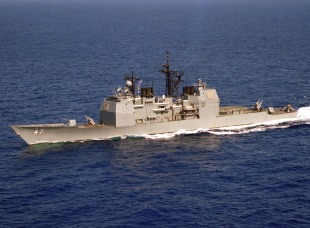 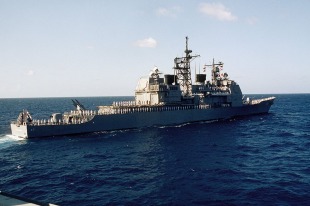 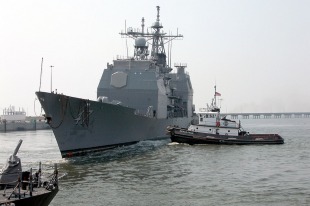 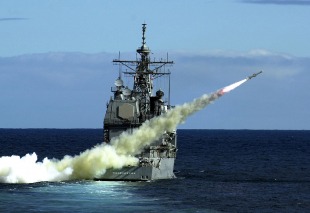 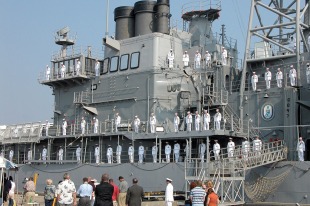 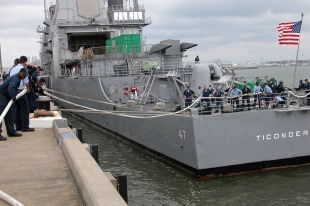 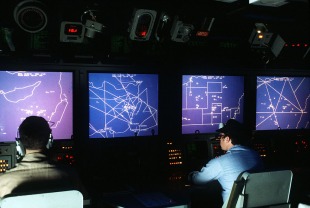 USS Ticonderoga (DDG/CG-47) was a guided-missile cruiser of the United States Navy. Homeported in Pascagoula, Mississippi, the «Tico» was the lead ship of her class.

Ticonderoga was the first combatant ship to feature the Aegis combat system (a limited version of the system had been tested on Norton Sound). This allows the ship to track and engage multiple targets (aircraft) much more effectively than any ship previously.

CG-47 is the fifth United States Navy vessel to carry on the name Ticonderoga. The ship was the fifth ship named for the Capture of Fort Ticonderoga in 1775. She was also named after the Essex-class aircraft carrier Ticonderoga (CV-14) that was nearly sunk during World War II. Most of the ships in the Ticonderoga class are similarly named for significant battles in U.S. history. The name «Ticonderoga» comes from an Iroquois word tekontaró:ken, meaning «it is at the junction of two waterways».

The United States Navy built the first Aegis cruisers using the hull and machinery designs of Spruance-class destroyers. Ticonderoga was ordered as a guided missile destroyer, but redesignated as a cruiser before she was laid down.

The contract to build DDG-47 Ticonderoga was awarded to Ingalls Shipbuilding on 22 September 1978. On 1 January 1980, she was redesignated as a guided missile cruiser, CG-47. Her keel was laid down on 21 January 1980, the 35th anniversary of the devastating kamikaze attack on the Essex-class aircraft carrier Ticonderoga. CG-47 was launched on 25 April 1981 and was delivered on 13 December 1982. She was commissioned on 22 January 1983 with First Lady Nancy Reagan, the ship's main sponsor, having the honor of christening the ship on 16 May 1981. The first Captain of the ship was Roland George Guilbault who later became an Admiral.

In the late 1980s, she served in the Persian Gulf as part of Operation Earnest Will while under the command of Captain James M. Arrison III, USN.

For a time in the late 1990s, she was based at Pascagoula, Mississippi, as part of Commander, Naval Surface Forces Atlantic's Westerns Hemisphere Group.

On 4 May 2004, she completed transit of the Panama Canal and then moved to cross the equator. Her ship crew engaged in the rites and rituals of the crossing, inducting the Captain of the ship as well as many of the crew in to 'Shell-Backs'. She completed her final deployment on 3 August 2004, and was decommissioned on 30 September of that year. After her decommissioning, she was towed to the Naval Inactive Ship Maintenance Facility in Philadelphia. In 2010 she was offered for museum donation by the Navy. There was an effort to bring Ticonderoga to Pascagoula, Mississippi, where she was built, to serve as a museum ship. In May 2013, the vessel was formally stricken from the Naval Vessel Register, for disposal. In October of the same year, The Ticonderoga Historical Society reported that the US Navy was going to scrap the ship after a number of potential museum sites were unable to add her to their collections. In June 2014, NAVSEA released a disposal reporting letter declaring the ex-Ticonderoga to be available for inspection by bidders and ready for disposal by scrapping or sinking. As of September 2016, the ship remained in Philadelphia.