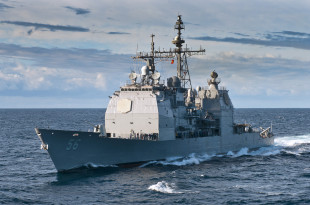 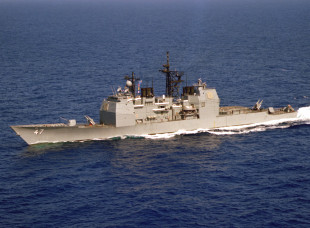 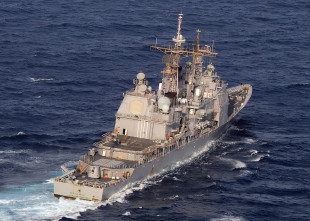 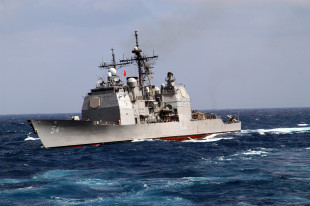 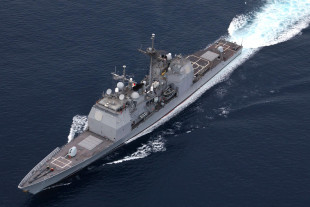 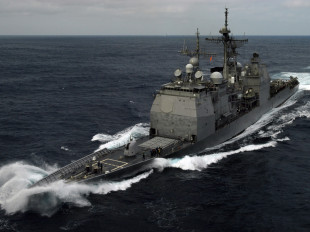 The Ticonderoga class of guided missile cruisers is a class of warships in the United States Navy, first ordered and authorized in the 1978 fiscal year. The class uses passive phased-array radar and was originally planned as a class of destroyers. However, the increased combat capability offered by the Aegis Combat System and the AN/SPY-1 radar system, together with the capability of operating as a flagship, were used to justify the change of the classification from DDG (guided missile destroyer) to CG (guided-missile cruiser) shortly before the keels were laid down for Ticonderoga and Yorktown.

Ticonderoga-class guided-missile cruisers are multi-role warships. Their Mk 41 VLS can launch Tomahawk cruise missiles to strike strategic or tactical targets, or fire long-range antiaircraft Standard Missiles for defense against aircraft or anti-ship missiles. Their LAMPS III helicopters and sonar systems allow them to perform antisubmarine missions. Ticonderoga-class ships are designed to be elements of carrier battle groups or amphibious ready groups, as well as performing missions such as interdiction or escort. With upgrades to their to AN/SPY-1 phased radar systems and their associated missile payloads as part of the Aegis Ballistic Missile Defense System, members of this class have also begun to demonstrate some promise as mobile anti-ballistic missile and anti-satellite weaponry platforms.

Of the 27 completed vessels, 19 were built by Ingalls Shipbuilding and eight by Bath Iron Works (BIW). All but one (Thomas S. Gates) of the ships in the class are named for noteworthy events in U.S. military history, and at least twelve—Ticonderoga, Cowpens, Anzio, Yorktown, Valley Forge, Bunker Hill, Antietam, San Jacinto, Lake Champlain, Philippine Sea, Princeton, Monterey, and Vella Gulf—share their names with World War II aircraft carriers. 22 ships were active in 2016, and expected to serve for 35 years since commissioning.