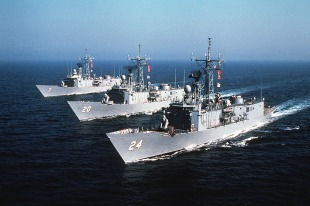 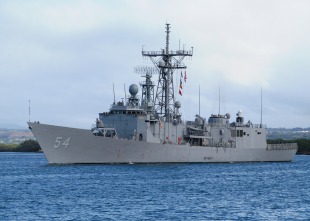 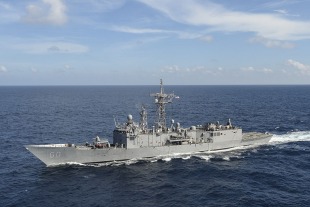 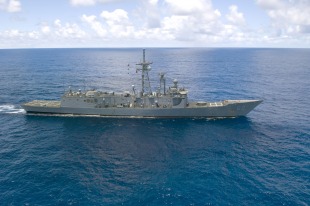 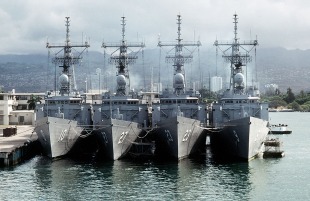 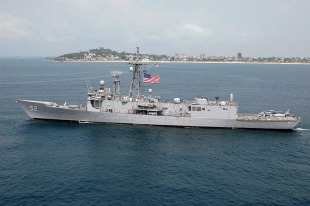 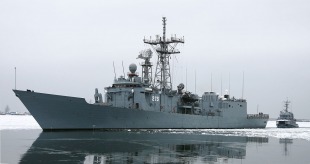 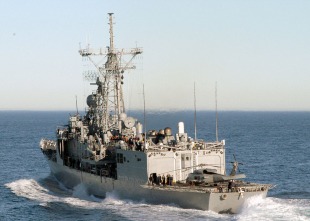 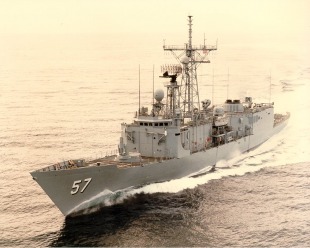 The Oliver Hazard Perry class is a class of guided-missile frigates named after the U.S. Commodore Oliver Hazard Perry, the hero of the naval Battle of Lake Erie. Also known as the Perry or FFG-7 (commonly «fig seven») class, the warships were designed in the United States in the mid-1970s as general-purpose escort vessels inexpensive enough to be bought in large numbers to replace World War II-era destroyers and complement 1960s-era Knox-class frigates.

In Admiral Elmo Zumwalt's «high low fleet plan», the FFG-7s were the low capability ships with the Spruance-class destroyers serving as the high capability ships. Intended to protect amphibious landing forces, supply and replenishment groups, and merchant convoys from aircraft and submarines, they were also later part of battleship-centred surface action groups and aircraft carrier battle groups/strike groups. Fifty-five ships were built in the United States: 51 for the United States Navy and four for the Royal Australian Navy (RAN). In addition, eight were built in Taiwan, six in Spain, and two in Australia for their navies. Former U.S. Navy warships of this class have been sold or donated to the navies of Bahrain, Egypt, Poland, Pakistan, Taiwan, and Turkey.

The first of the 51 U.S. Navy built Oliver Hazard Perry frigates entered into service in 1977, and the last remaining in active service, USS Simpson, was decommissioned on 29 September 2015. The retired vessels were either mothballed or transferred to other navies for continued service. Some of the U.S. Navy's frigates, such as USS Duncan (14.6 years in service) had fairly short careers, while a few lasted as long as 30+ years in active U.S. service, with some lasting even longer after being sold or donated to other navies. In 2020, the Navy announced the new Constellation-class as their latest class of frigates.

The ships were designed by the Bath Iron Works shipyard in Maine in partnership with the New York-based naval architects Gibbs & Cox. The design process was notable as the initial design was accomplished with the help of computers in 18 hours by Raye Montague, a civilian U.S. Navy naval engineer, making it the first ship designed by computer.

The Oliver Hazard Perry-class ships were produced in 445-foot (136 m) long «short-hull» (Flight I) and 453-foot (138 m) long «long-hull» (Flight III) variants. The long-hull ships (FFG 8, 28, 29, 32, 33, and 36–61) carry the larger SH-60 Seahawk LAMPS III helicopters, while the short-hulled warships carry the smaller and less-capable SH-2 Seasprite LAMPS I. Aside from the lengths of their hulls, the principal difference between the versions is the location of the aft capstan: on long-hull ships, it sits a step below the level of the flight deck in order to provide clearance for the tail rotor of the longer Seahawk helicopters.

The long-hull ships carry the RAST (Recovery Assist Securing and Traversing) system (also known as a Beartrap (hauldown device)) for the Seahawk, a hook, cable, and winch system that can reel in a Seahawk from a hovering flight, expanding the ship's pitch-and-roll range in which flight operations are permitted. The FFG 8, 29, 32, and 33 were built as «short-hull» warships but were later modified into «long-hull» warships.

American shipyards constructed Oliver Hazard Perry-class ships for the U.S. Navy and the Royal Australian Navy (RAN). Early American-built Australian ships were originally built as the «short-hull» version, but they were modified during the 1980s to the «long-hull» design. Shipyards in Australia, Spain, and Taiwan have produced several warships of the «long-hull» design for their navies.

The Oliver Hazard Perry-class frigates were designed primarily as anti-aircraft and anti-submarine warfare guided-missile warships intended to provide open-ocean escort of amphibious warfare ships and merchant ship convoys in moderate threat environments in a potential war with the Soviet Union and the Warsaw Pact countries. They could also provide air defense against 1970s- and 1980s-era aircraft and anti-ship missiles. These warships are equipped to escort and protect aircraft carrier battle groups, amphibious landing groups, underway replenishment groups, and merchant ship convoys. They can conduct independent operations to perform such tasks as surveillance of illegal drug smugglers, maritime interception operations, and exercises with other nations.

The addition of the Naval Tactical Data System, LAMPS helicopters, and the Tactical Towed Array System (TACTAS) gave these warships a combat capability far beyond the original expectations. They are well suited to operations in littoral regions, and for most war-at-sea scenarios. 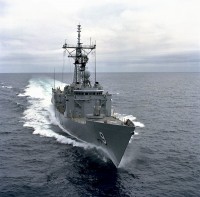 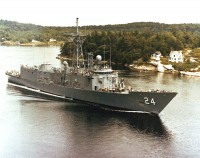 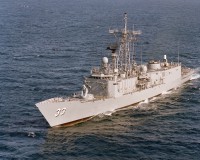 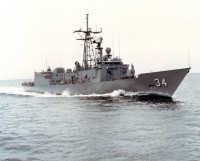 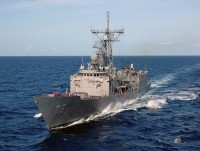 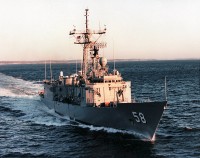 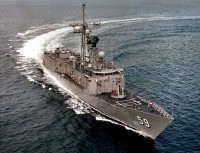 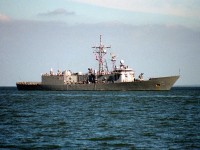 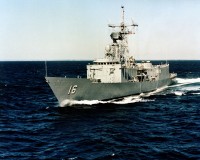 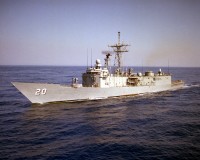 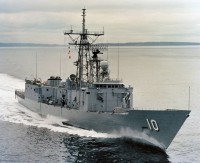