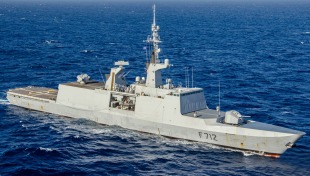 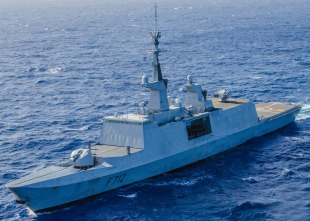 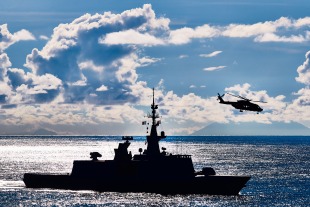 The La Fayette class (also known as FL-3000 for «Frégate Légère de 3,000 tonnes», or FLF for Frégate Légère Furtive) is a class of general purpose frigates built by DCNS in the 1980s/90s and still operated by the French Navy today. Derivatives of the type are in service in the navies of Saudi Arabia, Singapore and Taiwan.

The ships were originally known as «stealth frigates» due to their unique stealth design at the time. Their reduced radar cross section is achieved by a clean superstructure compared to conventional designs, angled sides and radar absorbent material, a composite material of wood and glass fibre as hard as steel, light, and resistant to fire. Most modern combat ships built since the introduction of the La Fayette class have followed the same principles of stealth.

All information gathered by the onboard sensors is managed by the Information Processing System, the electronic brain of the operation centre of the ship. It is completed by an electronic command aid system.

The ships are designed to accommodate a 10-tonne (9.8-long-ton) helicopter in the Panther or NH90 range (though they are also capable of operating the Super Frelon and similar heavy helicopters). These helicopters can carry anti-ship missiles AM39 or AS15, and they can be launched during sea state five or six due to the Samahé helicopter handling system. France ordered five ships of the La Fayette class in 1988, the last of which entered service in 2001. In the French Navy, they will be incrementally superseded in «first-rank» functions by five frégates de taille intermédiaire (FTI, «intermediate size frigates») from 2024.

It took several years to refine the concept, and the first ship was eventually launched in 1992, two years after the final design was completed. Weapon system testing took place in 1994, and particularly extensive trials were undertaken to prove the structure of the ship under a wide range of conditions. La Fayette was eventually commissioned in March 1996.

At the time of their commissioning, the units of the La Fayette class were the state of the art in stealth for warships. The shape of the hull and the superstructures is devised for the optimal reduction of the radar signature, which has been reduced by 60 percent: a 3,000-tonne La Fayette unit has the typical radar signature of a 1,200-tonne ship. Stealth is achieved with inclined flanks, as few vertical lines as possible, and very clean lines and superstructures: stairs and mooring equipment are internal, and prominent structures are covered by clear surfaces. The superstructures are built using radar-absorbent synthetic materials.

Their radar cross-section is equivalent to that of a large fishing boat, which can make camouflage among civilian ships possible; or that of a much less capable corvette, which could lead an enemy to underestimate the capabilities of the ship. In case of a direct attack, the small radar signature helps evade enemy missiles and fire control systems.[citation needed] The La Fayettes are also equipped with jammers that can generate false radar images, as well as decoy launchers.

Thanks to the adoption of low-power diesel motors and a special heat dissipation system, the La Fayette ships have a low thermal signature. The usual funnel is replaced with a small sets of pipes, aft of the mast, which cool the exit gas before it is released. The ships usually operate in warm areas, which further decreases the thermal contrast with the environment.

The magnetic signature is reduced by the presence of a demagnetisation belt.

The acoustic signature is minimized by mounting the engines on elastomeric supports, which minimize vibration transfers to the hull, and by rubber coatings on the propellers. The La Fayettes are equipped with the Prairie Masker active acoustic camouflage system, which generates small bubbles from underneath the hull to confuse sonars.

The superstructure is made of light alloy and glass-reinforced plastic, which allow a reduction in top weight. This provides adequate but sub-optimal resistance to fire. Vital zones are armoured in Kevlar, and important systems are redundant. The crew is protected against biological, chemical and nuclear environments.

Three of the French Navy frigates (La Fayette, Courbet and Aconit) were selected to receive mid-life upgrades extending their useful service lives into the early 2030s. The three frigates are receiving KingKlip Mk2 hull-mounted sonar to incorporate an anti-submarine capability, modernized point air defence systems (consisting of two renovated SADRAL launchers, removed from the retired Georges Leygues class, and operating MISTRAL Mk3 SAMs/SSMs) as well as other improvements including the latest version of the Exocet anti-ship missile and CANTO anti-torpedo countermeasures (initially fitted first to La Fayette when she received her upgrade in 2021–22). The upgrades will permit the three ships to operate through the 2020s and be retired between 2031 and 2034. The first vessel, Courbet, began her conversion refit in October 2020. She returned to sea in June 2021. In October 2021, La Fayette began her planned refit which is envisaged for completion over a nine-month period. She returned to sea in May 2022 to begin testing her new systems.

As of February 2021, the other two vessels of the class (Surcouf and Guépratte) were scheduled to undergo more modest structural and technical upgrades (with the elderly Crotale SAM to be removed), and be withdrawn from service in 2027 and 2031 respectively. With somewhat reduced general purpose capability, it is anticipated that the two ships will be re-assigned to offshore patrol duties for the remainder of their service life.

From 2024 the La Fayette class units will be incrementally complemented, and eventually replaced, in first rank functions in the French Navy by the FDI-class frigates. 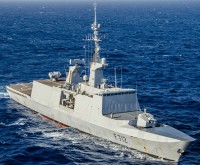 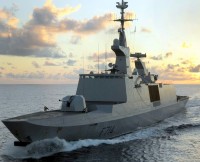