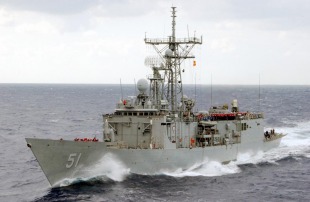 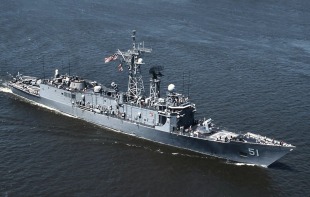 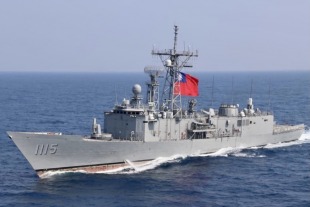 USS Gary (FFG-51) was an Oliver Hazard Perry-class frigate in the United States Navy. She was named for Medal of Honor recipient Commander Donald A. Gary (1903–1977). Gary was laid down on 18 December 1982 at Todd Pacific Shipyards, Los Angeles Division, San Pedro, California; launched on 19 November 1983, co-sponsored by Mrs. Dorothy G. Gary, widow of the late Cmdr. Gary, and Mrs. Joyce Leamer, the late Medal of Honor recipient's niece; and commissioned on 17 November 1984 at Naval Station Long Beach, Commander Harlan R. Bankert Jr. in command. She was the frigate long-hull variant (Flight II). The Gary was decommissioned from the US Navy on 5 August 2015 with the Taiwanese crew taking possession on 13 March 2017, and arrived at the ROCN Zyoying Naval Base on 13 May. She was formally commissioned into ROCN as the ROCS Feng Jia (PFG-1115) on 8 November 2018.