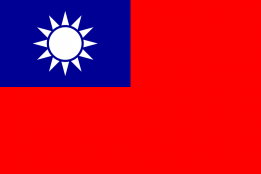 The ship prefix for ROCN combatants is ROCS (Republic of China Ship); an older usage is CNS (Chinese Navy Ship).