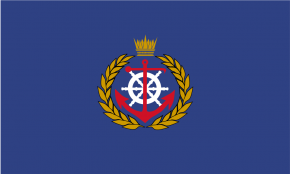 The Royal Bahrain Naval Force (RBNF) (previously known as Bahrain Defense Force, Naval Branch), is the maritime branch of the Bahrain Defense Force. The Fleet is based at Mina Sulman Naval Base and has a flight wing which can operate off the corvettes, consisting of two MBB BO-105 helicopters. The flagship of the RBNF is the vessel RBNS Sabha, an American-built missile frigate given to the state as a gift in 1996.