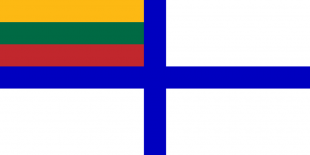 The Lithuanian Navy is the naval arm of the Lithuanian Armed Forces. Though formally established on 1 August 1935 its roots stretch back as far as naval engagements on the Baltic Sea in the Medieval period. Lithuanian naval units saw some service with Soviet naval forces during World War II, and the navy has been re-established in its own right and continues to expand since Lithuania's independence in 1990.

After the declaration of independence on 11 March 1990, Lithuania had to re-establish its sovereignty as well as organize the state's defense system. From that time the units of the Lithuanian armed forces were formed. On 4 July 1992, the Lithuanian Navy was re-established. Juozapas Algis Leisis was appointed as commander of the Coast Guard Squadron.