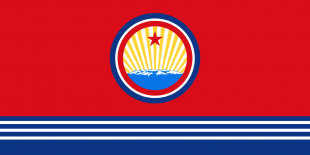 The North Korean navy is considered a brown water navy and operates mainly within the 50 kilometer exclusion zone. The fleet consists of east and west coast squadrons, which cannot support each other in the event of war with South Korea. The limited range of most of the antiquated and derelict vessels means that, even in peacetime, it is virtually impossible for a ship on one coast to visit the other coast.