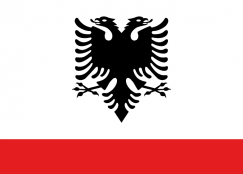 The vessels of the Albanian Naval Force are mostly patrol craft and support craft. The Naval Force operates four large Damen Stan Type 4207 patrol boats, three of which were built in Albania. Some of the Naval Force's vessels were purchased from, or donated by Italy, the United States, China, or the Soviet Union. Most former Soviet or Chinese boats have been retired from service; only one Soviet built minesweeper remains in service.

The Navy performs mainly duties, based on the concept of «one Force, two Missions.» The legal framework has been updated in order to facilitate these missions and EU-NATO integration. The Navy is also responsible for aids to navigation, including lighthouses.