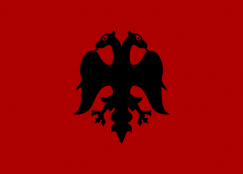 In 1925, after the would-be King Zog came to power as President, the first proper warships of the Albanian Navy were acquired. Both vessels were ex-German flat-bottom minesweepers of the 205-ton type. They were named Shqipnia (ex-FM-16) and Skenderbeg (ex-FM-23) and served as gunboats. Despite comprising the entire Albanian Navy, the two warships spent their last two years of service rusting off Durrës before being sold for scrap.