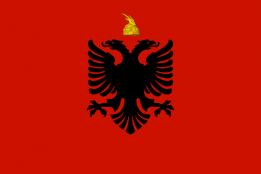 After Albanian President Zog crowned himself King in 1928, he re-created the Albanian Navy that same year. Drawing lessons from the failed use of second-hand warships, he ordered a class of four smaller, but newly-built patrol boats from Venice, Italy. Each of these vessels displaced between 40 and 46 tons, measuring 24.4 meters in length. Armament consisted of one three-inch (76 mm) naval gun and two machine guns, with a top speed amounting to 17 knots. The four boats were named after Albanian cities: Tiranë, Vlorë, Durrës and Sarandë.