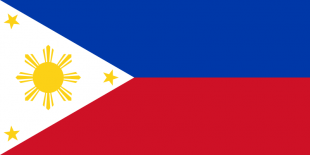 The Philippine Navy (PN; Filipino: Hukbong Dagat ng Pilipinas; Spanish: Armada de Filipinas) is the naval warfare service branch of the Armed Forces of the Philippines. It has an estimated strength of 24,000 active service personnel, including the 7,500-strong Philippine Marine Corps. It shares the responsibility of patrolling the maritime borders with the Philippine Coast Guard, its former attached unit until the latter became a separate maritime law enforcement agency on 1998.

The Philippine Navy is administered through the Department of National Defense (DND). Under the AFP structure, the Chief of Staff, AFP (CSAFP), a four-star general/admiral (if the officer is a member of the Philippine Navy), is the most senior military officer. The senior naval officer is the Flag Officer-in-Command (FOIC), usually with a rank of vice admiral. He, along with his or her air force and army counterparts, is junior only to the CSAFP. The FOIC is solely responsible for the administration and operational status of the Navy. The FOIC's counterpart in the U.S. Navy is the Chief of Naval Operations.

Currently the navy establishment is actually composed of two type commands, the Philippine Fleet and Philippine Marine Corps (PMC). It is further organized into seven naval operational commands, five naval support commands, and seven naval support units. Considering the vastness of the territorial waters that the Navy has to protect and defend, optimal deployment of naval resources is achieved through identification of suitable locations where the presence of these units are capable of delivering responsive services.

The Philippine Fleet, or simply the «Fleet», is under the direct command of the Commander Philippine Fleet while the marine corps is answerable to the commandant, PMC (CPMC). The Flag Officer-In-Command (FOIC) has administrative and operational control over both commands.