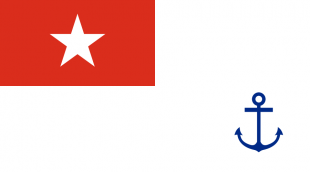 The Myanmar Navy is the naval branch of the armed forces of Myanmar with 19,000 men and women. The Myanmar Navy currently operates more than 122 vessels. Before 1988, the Myanmar Navy was small and its role in the many counterinsurgency operations was much less conspicuous than those of the army and air force. Yet the navy has always been, and remains, an important factor in Myanmar's security and it was dramatically expanded in recent years to an external threat defence role in Myanmar's territorial waters.