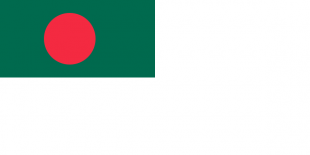 The Bangladesh Navy is the naval warfare branch of the Bangladesh Armed Forces, responsible for Bangladesh's 118,813 square kilometres (45,874 sq mi) of maritime territorial area, and the defence of important harbours, military bases and economic zones. The primary role of the Bangladesh Navy is to protect the country's economic and military interests at home and abroad. The Bangladesh navy is also a front line disaster management force in Bangladesh, and participates in humanitarian missions abroad. It is a key regional player in counter terrorism efforts, and engages in global peacekeeping with the United Nations.