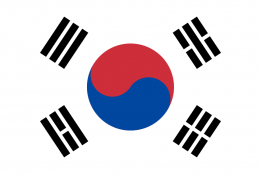 Since the end of the Korean War, the South Korean navy has concentrated its efforts to building naval forces to counteract the North Korean navy, which has littoral naval capabilities. As South Korea's economy grew, the ROK Navy was able to build larger and better equipped fleets to deter aggression, to protect national maritime rights and to support the nation's foreign policy. As a part of its mission, the ROK Navy has engaged in several peacekeeping operations since the turn of the 21st century.

The ROK Navy aims to become a blue-water navy by 2020.

The ROK Navy employs the U.S. Navy-style letter based hull classification symbols to designate the types of its ships and hull numbers to uniquely identify its vessels (e.g. DDH 975). The names are that of the historical figures, provinces, cities, counties, peaks, lakes, islands, and birds. The Chief of Naval Operations selects the names of ships.

The ship prefix for all the commissioned ROK Navy ship is ROKS (Republic of Korea Ship) when the names of ships are written in English.