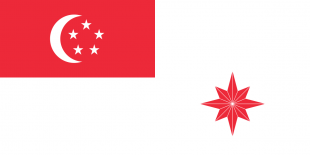 All commissioned ships of the RSN have the prefix RSS standing for (Republic of Singapore Ship).

The fleet has expanded massively since 1975 and is now equivalent to the navy of a Nordic nation. It took part in humanitarian relief missions during the 2004 Asian tsunami and assisted in both the search for MH Flight 370 in the Gulf of Thailand and QZ Flight 8501 in the Karimata Strait.

The Singapore Navy has increased its capability to deal with increasingly complex environments both abroad and close to home. This includes combating the rise of piracy surrounding the waters of the adjacent Malacca Straits and formerly disputed island of Pedra Branca in the South China Sea, considered as vital sea lines of communications. In addition, it has engaged in anti piracy operations in the Gulf of Aden and Horn of Africa under international task forces.

The RSN celebrated its 50th Anniversary in 2017.