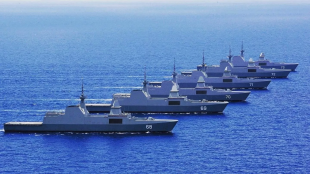 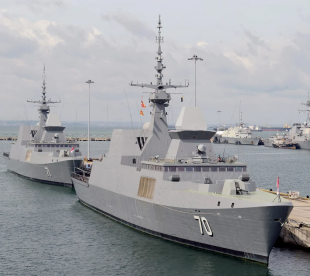 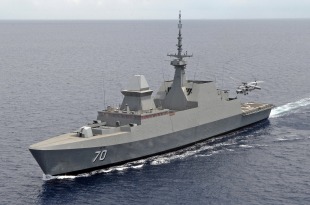 The Formidable-class multirole stealth frigates are the latest surface platforms to enter into service with the Republic of Singapore Navy, and are multi-mission derivatives of the French Navy's La Fayette-class frigate. The six ships form the First Flotilla of the RSN.

The search for a replacement for the aging Sea Wolf-class missile gunboats, which entered into service in 1972, started in the mid-1990s. The United States, Sweden and France participated in the bid for the contract. In March 2000, the Singapore Ministry of Defence awarded the contract to DCNS for the design and construction of six frigates. A key feature of the contract was the technology transfer arrangement. Under the arrangement, DCNS was to design and build the first frigate in its Lorient yard in France, while the remaining five frigates were to be built locally by Singapore Technologies (ST) Marine at its Benoi yard in Singapore. Subsequent maintenance and midlife retrofit will be done by ST Marine.

Construction of Formidable began in late 2002, when the keel was laid down in Lorient in November 2002.

Radar cross-section (RCS) reduction features have been incorporated into the Formidable class design, with inclined hull sides and bulwarks, as well as concealment of ship boats and replenishment-at-sea equipment behind low-RCS curtains. The Formidable class have a significantly reduced profile than the La Fayette class and its other derivatives, due to the smaller superstructure and the use of enclosed sensor mast technology. The frigate is also constructed entirely of steel, unlike the La Fayette class, which makes extensive use of weight-saving composite structures in its aft superstructure block. The frigates also possess better sea keeping qualities and are able to stay at sea for longer periods of time.

The frigates are equipped with the Thales Herakles passive electronically scanned array multi-function radar, which provides three-dimensional surveillance for up to 250 km (155.3 mi). The radar provides all-round automatic search and tracking of both air and surface targets, and is integrated with the MBDA Aster air defence system. Utilising the DCNS Sylver vertical launch system (VLS), each frigate is equipped with 32 cells. It is reported that the frigates have a special surface-to-air missile configuration, combining the Thales Herakles radar with the Sylver A50 launcher and a mix of Aster 15 and 30 missiles.

The Formidable-class frigates are key nodes within the Singapore Armed Forces' Integrated Knowledge-based Command and Control network, a concept similar to the United States Department of Defense's network-centric warfare doctrine. The locally developed Combat Management System integrates all the sensors and weapon systems on board, and a dual Fast Ethernet data transfer system forms the backbone of this system.

Each frigate has a span of influence that stretches up to about 200 nmi (370 km), where it acts as the Navy's mobile operations centre out at sea and receives information from sister ships and aerial assets deployed within the range. The Combat Management System will then make sense of the different data, establish an accurate picture of the area of operations, and send the information back to shore and to its army and air force counterparts. This increases battlespace awareness and allows little time for the enemy to react due to the short sensor-to-shooter loops.

The frigates are equipped with Boeing Harpoon missiles and Oto Melara 76 mm guns for surface defence. The Harpoon missile has a range of 130 km (70 nmi) and uses active radar guidance. It is armed with a 227 kg (500 lb) warhead. There is space for as many as 24 Harpoon missiles at the center of ship, making it the most well armed ship of its class. The gun fires 6 kg (13 lb) shells to a maximum range of 30 km (33,000 yd) at a firing rate of up to 120 rounds per minute.

The frigates are also equipped with the EDO Corporation active low frequency towed sonar to enable long range submarine detection and classification, as well as EuroTorp A244/S Mod 3 lightweight torpedoes fired from two B515 triple-tube launchers hidden behind the bulwark.

The frigates are equipped with Sikorsky S-70B naval helicopters, an international derivative of the United States Navy Sikorsky SH-60B Seahawk. The Ministry of Defence signed a contract with Sikorsky Aircraft Corporation in January 2005 to acquire six of these helicopters, which will be organic to the frigates. Each of these naval helicopters are equipped with a Telephonics AN/APS-143 Ocean Eye X-band maritime surveillance and tracking radar, a L-3 Communications Helicopter Long Range Active Sonar (HELRAS) dipping sonar, EuroTorp A244/S Mod 3 torpedoes and a Raytheon AAS-44 electro-optic system to provide infrared detection and tracking.[19] The naval helicopters will be raised as a squadron in the Republic of Singapore Air Force and piloted by air force pilots, but the system operators will be from the Navy.