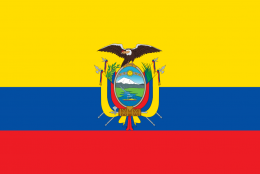 The Ecuadorian Navy is responsible for the surveillance and protection of national maritime territory and has a personnel of 9,127 men to protect a coastline of 2,237 km which reaches far into the Pacific Ocean. The vessels are identified by the ship prefix B.A.E.: Buque de la Armada del Ecuador (Ship of the Ecuadorian Navy).

The roots of the Ecuadorian Navy or (Armada Ecuatoriana) date back to 1823 whilst forming a part of the Gran Colombian fleet. In 1832 the by then, Ecuadorian congress established officially «The Ecuadorian Maritime Department». On 25 July 1941 during the Ecuadorian–Peruvian War, the gunboat Calderon commanded by Rafael Morán Valverde encountered the Peruvian destroyer Almirante Villar in the Jambeli channel. The Ecuadorian gunboat opened fire on Villar, keeping its distance while doing shots for elevation, but the Peruvian destroyer returned fire for the duration of the chase, which was ended by the Peruvians when the Calderon took refuge in the channels. The Calderon was unharmed in the skirmish and according to Ecuador, the Peruvian Villar suffered from damages, allegation that has always been refuted by Perú. However, this event had no influence over the general outcome of the war as Puerto Bolivar was lost to Peruvian Troops only two days later. BAE Tungurahua was bought from a private owner but was scrapped shortly after conversion due to engine malfunctions.