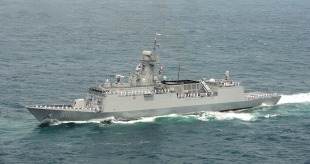 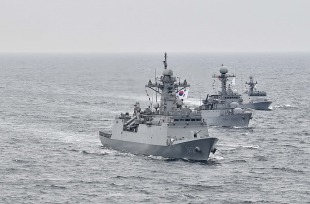 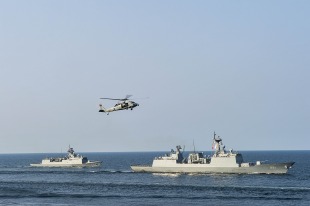 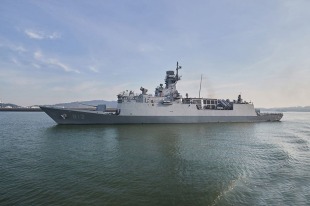 The Incheon-class frigates also known as the Future Frigate eXperimental or FFX during development, are coastal defense frigates of the Republic of Korea Navy. The lead ship was launched on 29 April 2011. The Incheon-class frigates will replace the aging fleet of Pohang-class corvettes and Ulsan-class frigates, and take over multi-role operations such as coast patrol, anti-submarine warfare and transport support. Later batches are planned to be specialized on anti-air and anti-submarine warfare. An improved version is being introduced as the Daegu-class frigate; this was previously known as Batch II of the Incheon class.

In the early 1990s, the Korean government plan for the construction of next generation coastal ships named Frigate 2000 was scrapped due to the 1997 Asian financial crisis. But the decommissioning of the Gearing-class destroyers and the aging fleet of Ulsan-class frigates, the plan was revived as the Future Frigate eXperimental, also known as FFX in the early 2000s.

The Republic of Korea Navy initially wanted twenty-four 3000 ton frigates to replace the Ulsan-, Pohang- and Donghae-class coastal fleet of 37 ships. It was later decided that six 2700 ton ships will be constructed for the first batch. In 2008, the plan was further downgraded to 2300 tons when president Lee Myung-bak took office, with the number of ships for the first batch down to six. 8 ships are planned for the second batch of FFX with the final goal of 20-22 frigates.

In 2010 the construction of the first FFX frigate was awarded to Hyundai Heavy Industry and in April 2011 the first of its class, ROKS Incheon was launched. The ship is named after the western port city of Incheon, representing the Republic of Korea Navy's initiative to defend the western islands due to the constant clashes with the North Korean navy in this area.

The Incheon-class frigate's main gun is the 127mm/L62 Mk. 45 Mod 4 naval gun. This was chosen over a smaller 76mm for naval barrage support in amphibious landings and superiority in ship to ship firing. Point-defense armaments include a single 20 mm Phalanx CIWS and a RIM-116 Rolling Airframe Missile Block 1 21-round launcher. The anti-submarine warfare armaments consists of K745 LW Cheong Sahng-uh (Blue Shark) torpedoes. Anti-ship capability is provided by SSM-700K Haeseong (Sea Star) long-range anti-ship missiles, each with performance similar to the American Harpoon. Land-attack capability is provided by the recently developed Tactical Ship to Land attack missile, which is derived from the SSM-700K Haeseong; initially, the land attack missiles were planned to start arming batch 2 Incheon-class ships, but feasibility studies showed they could be retrofitted to batch 1 ships, which began in September 2016, enhancing their flexibility and deterrence capabilities with 150–200 km (93–124 mi) range tactical missiles. 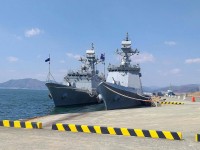