The Cheng Kung-class frigates are guided-missile frigates currently in service in the Republic of China Navy (ROCN). They are based upon the U.S.Oliver Hazard Perry class and built by China Shipbuilding Corporation in Kaohsiung, Taiwan under license throughout the 1990s as part of the Kuang Hua I project. These frigates served as the mainstay of the ROCN's area air defense capability prior to the acquisition of the Keelung (Kidd)-class destroyers in 2005. They are designated with the hull classification PFG (Patrol Frigate, Guided missile) rather than FFG (Frigate, Guided missile) used by the Oliver Hazard Perry class.

In order to control the new weapon systems on the frigates, which the Mk 92 Fire Control System could not integrate at the time, a second Combat Direction System (CDS), the H930 Modular Combat System (MCS) was installed in order to control the 8 HF-2 (or four HF-2 and four HF-3 on certain ships) Anti-ship missile and the two Bofors 40mm/L70 guns. However, the Mk 92's Harpoon mode was deleted due to the US government refusal to sell the Harpoon missile system to Taiwan at the time. Also deleted were some of Mk 92's ASW modes, along with the refusal to sell SQR-19 Towed Array sonar system.

Originally only two lead ships were going to be built to this standard, with the remaining six ships in the class built under the ACS (Advance Combat System) project with a lighter AEGIS (that later became SPY-1F), 48-64 cell Mark 41 Vertical Launch System and other systems, and a 15 metres (49 ft) plug-in section. Delay in the design and budget changed the project to four ships in PFG-1101 configuration and the last four ships in ACS configuration, then more delays changed to 6+2, then 7+1. By the mid 1990s, the ROCN decided the ACS project was too risky, too long and too over budget, finally canceling it after the seventh ship was built to the PFG-1101 standard. However, enough of the long lead items were already purchased so that in late 2000, the ROCN decided to go ahead with the eighth ship's construction with PFG-1101 configuration—minus the two Bofors 40mm/L70 guns, after getting necessary funding. 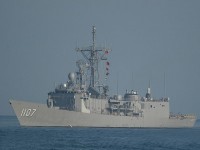