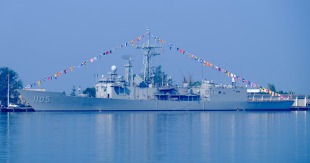 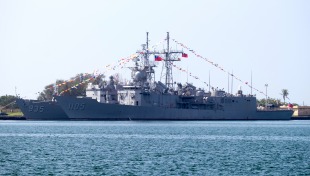 ROCS Chi Kuang (PFG2-1105) is a Cheng Kung-class guided missile frigate of the Republic of China Navy, used mainly in local air-defense and anti-submarine roles. It is the third of eight Taiwanese-built frigates based on the Oliver Hazard Perry class. Laid down on 4 October 1992 and launched on 27 September 1993, Chi Kuang was commissioned in service on 7 March 1995. All of these Taiwanese FFGs have the length of the later Oliver Hazard Perry FFGs, but have a different weapon and electronics fit. She was the frigate long-hull variant (Flight II).