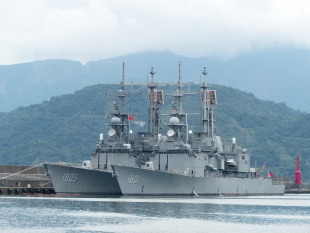 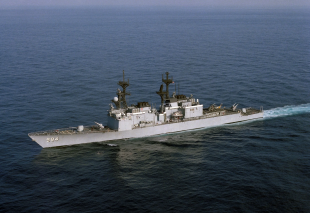 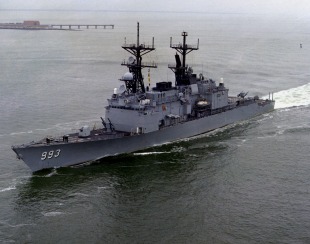 The Kidd-class destroyers were a series of four guided missile destroyers (DDGs) based on the Spruance class. In contrast to their predecessor's focus on anti-submarine warfare, the Kidds were designed as more advanced multipurpose ships with the addition of considerably enhanced anti-aircraft capabilities. Originally ordered for the former Imperial Iranian Navy, the contracts were canceled when the 1979 Iranian Revolution began, and the ships were completed for the United States Navy. They were decommissioned in 1999 and sold to the Republic of China Navy as the Kee Lung class.

These destroyers were originally ordered by the last Shah of Iran for service in the Persian Gulf in an air defence role. The original order of six ships was tentatively assigned hull numbers DD 993–998 by the U.S. Navy but it was reduced to four ships after U.S. Congress declined to halt the original production run of 30 Spruance ships. Compared to the preceding Spruance class, they retained the former's anti-submarine capabilities while adding two Tartar-D missile launchers for the Mark 26/Standard anti-aircraft missile system. In order to operate more effectively in the Middle East, they also had four air conditioning plants to the Spruances' three, additional dust separators on their gas turbines' air intakes, and increased water distillation capacity. The Shah was overthrown in the Iranian Revolution, prior to Iran accepting delivery of the ships, causing the United States Navy to integrate the vessels into its own fleet in 1981-82 as the Kidd-class.

In 2001, the U.S. authorized the reactivation and sale of all four ships to Taiwan (Republic of China). All four have been transferred to the Republic of China Navy under the Kuang Hua VII program. They were sold for a total price of US$732 million with upgraded hardware, overhaul, activation, and training, included a reduced missile loadout of 148 SM-2 Block IIIA and 32 RGM-84L Block II Harpoon anti-ship missiles.

The first two ships, ex-Scott and ex-Callaghan, arrived at Su-ao, a military port in eastern Taiwan, in December 2005, and were named Kee Lung and Su Ao in a commissioning ceremony on 17 December 2005. Following the tradition of ship class naming, ROCN has referred to these vessels as Kee Lung-class destroyers, with the ships named after military ports in Taiwan. The remaining two units, ex-Kidd and ex-Chandler, were delivered in 2006, and named Tso Ying and Ma Kong, respectively.