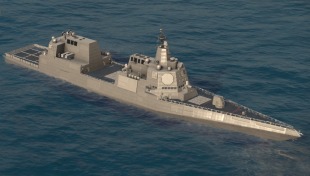 The DDG(X) program, also known as the Next-Generation Guided-Missile Destroyer program, is a United States Navy program to develop a class of surface combatant vessels to succeed its 22 Flight II Ticonderoga-class cruisers and older flights of the Arleigh Burke-class destroyer. The program is the culmination of the Large Surface Combatant (LSC) initiative that followed the cancellation of CG(X), curtailed procurement of the Zumwalt-class destroyer, and the eventual need for replacing current guided missile cruisers and destroyers. The ships will become the principal large surface combatants of the U.S. Navy and can incorporate more powerful sensor systems and have greater space and weight margins for future growth.

With the cancellation of the CG(X) in 2010, the U.S. Navy embarked on new studies and programs for the future of the air defense role fulfilled by the Ticonderoga-class cruisers. Due to the cruisers being built on the Spruance-class destroyer hulls, they had limited upgrade potential due to the space, weight, and power margins. Meanwhile, the procurement of the Zumwalt-class destroyers was severely curtailed due to high costs and a renewed emphasis on air and missile defense for larger combatants. Eventually, the Navy chose to upgrade the Ticonderogas and procure the Flight III Arleigh Burke-class destroyers with the enhanced AN/SPY-6 and improved combat systems to supplement the Ticonderogas for air and missile defense; meanwhile a Future Surface Combatant (FSC) would eventually replace the Ticonderoga-class, which will reach the end of their service lives in the 2020s, as well as older flights of the Arleigh Burke-class. The FSC evolved into the Large Surface Combatant (LSC) program, which became the DDG(X) with the program office established in June 2021. In February 2022, Gibbs & Cox was contracted to provide design and engineering support.

United States Navy
Under construction
12,000 t
No comments yet
Log in or Register to write comments
Top 5 biggest