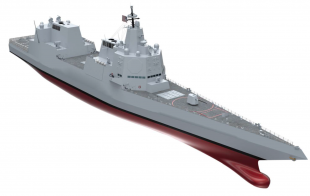 Various hull configurations are currently being tested at Naval Surface Warfare Center (NSWC) Carderock and NSWC Philadelphia. A concept presented at the 2022 Surface Warfare Symposium depicts an angular hullform with a conventional bow, with a superstructure reminiscent of the Zumwalt-class destroyer. Future vessels of the class may be lengthened with a payload module for additional capabilities.

The DDG(X) hull design will incorporate lessons and elements from both the Arleigh Burke and Zumwalt designs. The vessels will be able to accommodate larger missile launch systems, improved survivability, and space, weight, power, and cooling margins for future growth. As the ships will be replacing the Ticonderoga-class cruisers, they will have air defense command and control facilities and accommodations for an admiral's staff.

The DDG(X) will use integrated electric propulsion (IEP) as employed on the Zumwalt-class, with 50% greater range, 120% greater time on station, and 25% reduction in fuel burn compared to current U.S. Navy destroyers.

The sensors will initially be enlarged variants of the AN/SPY-6 radar mounted on the Flight III Arleigh Burke-class destroyers. The hull is designed with provisions for upgraded sensors in the future, including larger radar arrays.

The vessels will be initially fitted with 32-cell blocks of the Mk. 41 VLS, with the concept image of the hull showing four such blocks. In lieu of the Mk. 41 block, a 12-cell block of larger launchers for hypersonic missiles can also be accepted. The concept image also shows the vessel mounting a 5-inch (127-mm)/62 cal Mk. 45 Mod. 4 main gun. Upgraded versions of the class may also incorporate directed energy weapons, with lasers ranging from 150 to 600 kW.