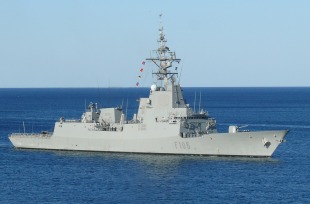 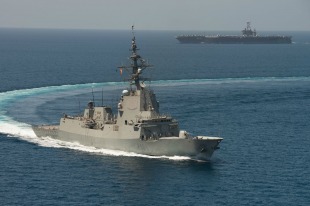 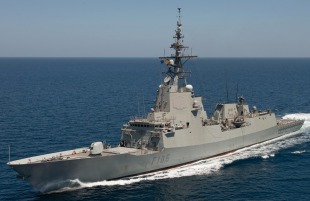 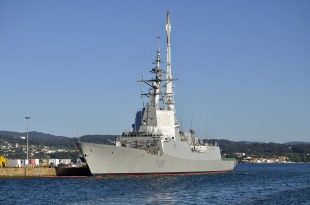 Cristóbal Colón is the fifth and last ship of the Álvaro de Bazán-class of air defence frigates entering service with the Spanish Navy. The ship is named after Christopher Columbus, an Italian explorer that discovered America in the name of the Crown of Castile. It is the most modern ship of the Spanish Navy.

Cristóbal Colón frigate was ordered on May 20, 2005 and its building started in Ferrol shipyards on June 29, 2007. The ship was launched on November 4, 2010 and commissioned on October 23, 2012. The frigate was sponsored by the Infanta Margarita of Bourbon.

On February 9, 2013, it sailed from its base in Ferrol, in its first navigation out of the Galician waters to set sail for the naval base of Rota, where it arrived on February 11, starting from that moment a process of inspection, certification and naval training that ended on the February 15. On February 14, a Sikorsky SH-3 made the first point on its flight deck. On February 24, 2014, she sailed from her base in Ferrol to join the Atalanta anti-piracy operation in the Indian waters.

After releasing Álvaro de Bazán in Djibouti, and while she was in the port of this African city, on March 16, 2014, an accidental firing of the 127-mm cannon occurred, whose projectile fell to the sea after flying over a hotel and a mosque; an incident that forced the Spanish diplomatic authorities to apologize.

On June 26 and 27, 2014, the frigate escorted the cruiser USS Vella Gulf against conventional aerial threat in its passage through the Mediterranean, as the US Navy was configuring a combat system to intercept ballistic targets outside the Earth's atmosphere.

In mid-July 2016, ESPN Cristóbal Colón certified her combat system in Norfolk, US. with the American destroyer USS Arleigh Burke, after which she made a stopover in Halifax, Canada to support Navantia's commercial options in a contest for the construction of fifteen frigates. The ship arrived at her base in Ferrol on August 2, 2016.

On January 9, 2017, F105 sailed from her base in Ferrol to Australia where she plans to stay until June 2017 to train the crews of Hobart class ships based on this vessel, as well as support the options of Navantia in a new competition for the construction of nine frigates. A stopover is planned in Saudi Arabia on 20 and 21 January in support of a possible contract for the sale of five corvettes to that country. On 20 and 21 January 2017, a stopover took place in the Saudi port of Yeda, where the ship received a delegation from the Saudi Navy. On February 20, 2017, Cristóbal Colón frigate arrives in Australia.

On June 24, 2017, the frigate finished its deployment in Australia and began its return to base. It will arrive at its base in August stopping earlier in Papeete, French Polynesia and Callao, Peru. The ship participated in the exercise Unitas 2017 between July 13 and 26.

The design of the Cristóbal Colón contemplates several improvements with respect to the original design of the class. It incorporates new Bravo 16V engines that increase its maximum speed and a bow thruster of 850 kW for operations in port. In weaponry and combat systems, two 25mm Mk 38 guns are added for close defense, a new electronic and submarine warfare control system, Aries surface surveillance radar, SPY-1 radar improvements, and improvements in communications and control systems. F105 can also operate with NH 90 helicopters by expanding the hangar and flight deck.