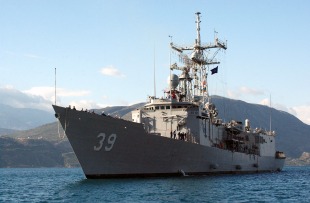 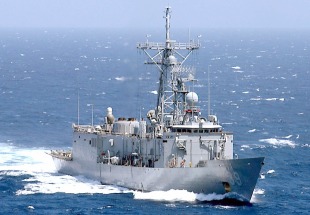 USS Doyle (FFG-39) was the 30th ship to be constructed in the Oliver Hazard Perry class of guided missile frigates of the United States Navy. Doyle was named after Vice Admiral James Henry Doyle (1897–1982). Vice Admiral Doyle was most known for his contributions during the Korean War as Commander Amphibious Group One. The ship was in service from 21 May 1983 to 29 July 2011. During her 28 years of service, Doyle went on at least six deployments to the Mediterranean Sea and two deployments to the Persian Gulf, including participation in Operation Earnest Will. The ship also operated in the Black Sea, Baltic Sea, and deployed to operate with the Middle East Force. Doyle took part in UNITAS 39-98. Deployed to the Standing Naval Forces Atlantic, and conducted three Southern Command Deployments. She was the frigate long-hull variant (Flight II).