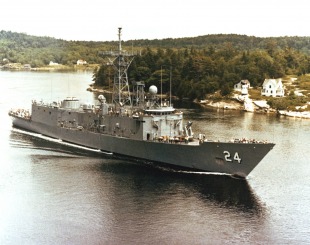 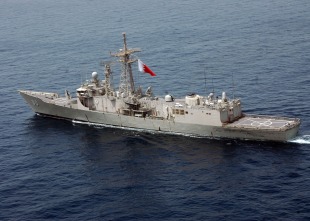 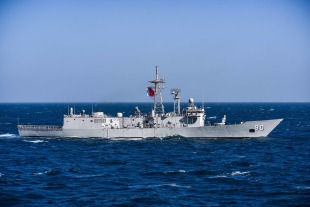 USS Jack Williams (FFG-24), sixteenth ship of the Oliver Hazard Perry-class of guided missile frigates, was named for Pharmacist's Mate Third Class Jack Williams, who was posthumously awarded the Medal of Honor for his heroism in the Battle of Iwo Jima. She was the frigate short-hull variant (Flight I).

Ordered from Bath Iron Works, Bath, Maine, on 28 February 1977 as part of the FY77 program, Jack Williams was laid down on 25 February 1980; launched on 30 August 1980, sponsored by Mrs. Fern Williams Carr, sister of PhM3c Williams; and commissioned on 19 September 1981, Commander Hugh Edward Carroll II in command.

Decommissioned and stricken on 13 September 1996, she was transferred to Bahrain the same day and recommissioned as RBNS Sabha (FFG-90).

Jack Williams (FFG-24) was the first ship of that name in the US Navy.