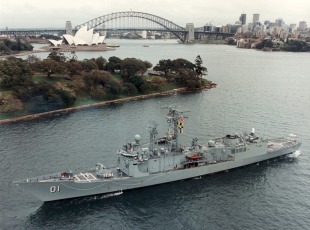 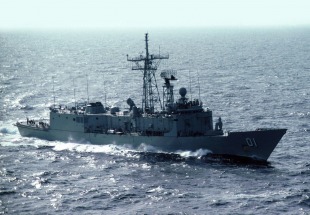 HMAS Adelaide (FFG 01) was the lead ship of the Adelaide class of guided missile frigates built for the Royal Australian Navy (RAN), based on the United States Navy's Oliver Hazard Perry-class frigates. She was built in the United States and commissioned into the RAN in 1980. She was the frigate ong-hull variant (Flight II).

During her career, Adelaide was part of Australian responses or contributions to the 1987 Fijian coups d'état, the Iraq invasion of Kuwait, the Indonesian riots of May 1998, the INTERFET peacekeeping taskforce, the War in Afghanistan, and the United States-led invasion of Iraq. In 1997, the frigate rescued two competitors in the 1996–97 Vendée Globe solo, round-the-world yacht race. In 2001, a boat carrying suspected illegal immigrants was intercepted by Adelaide; the events of this interception became the centre of the Children overboard affair.

In 2008, Adelaide was the second ship of the class to be decommissioned, in order to offset the cost of an upgrade to the other four vessels. This ship was to be sunk off Avoca Beach, New South Wales as a dive wreck on 27 March 2010, until an appeal to the Administrative Appeals Tribunal by protest groups led to a postponement of the scuttling until additional cleanup work was completed. Despite further attempts to delay or cancel the scuttling, Adelaide was sunk off Avoca on 13 April 2011.