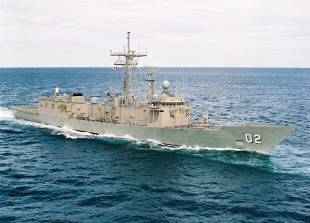 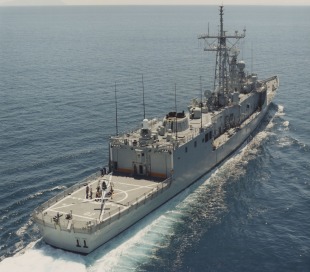 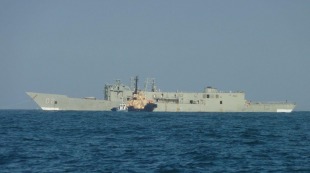 HMAS Canberra (FFG 02) was an Adelaide class guided missile frigate of the Royal Australian Navy (RAN). Based on the Oliver Hazard Perry class design, Canberra was one of four Adelaide class ships constructed in the United States of America, and one of six to serve in the RAN.

The frigate entered service in 1981. During her career, Canberra was assigned to escort the Royal Yacht Britannia during Queen Elizabeth II's visit in 1988, helped enforce the post-Gulf War United Nations' sanctions against Iraq during 1992 and 1993, was part of the Australian responses to the 1998 Indonesian riots and the 2000 Solomon Islands Civil War, and returned to the Persian Gulf in 2002 as part of the War in Afghanistan.

In 2005, Canberra became the first ship of her class to be decommissioned. The frigate was marked for conversion into a dive wreck and artificial reef off Barwon Heads, Victoria, and was scuttled on 4 October 2009.