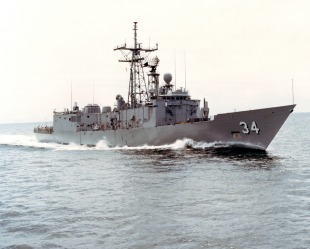 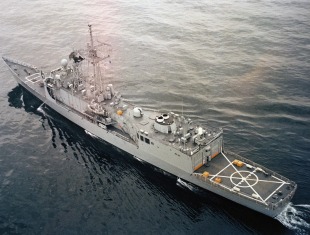 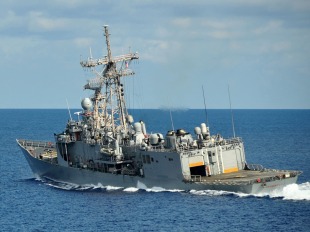 USS Aubrey Fitch (FFG-34), the twenty-sixth ship of the Oliver Hazard Perry-class of guided missile frigates, was named for Vice-Admiral Aubrey Fitch (1883–1978), who was noted for his outstanding command work in the South Pacific during World War II. She was the frigate short-hull variant (Flight I). Ordered on 23 January 1978, as a part of the FY-1978 program, Aubrey Fitch was laid down on 10 April 1981 at the Bath Iron Works, Bath, Maine. She was launched on 17 October 1981—sponsored by Mrs. Francesca Fitch Ferguson, the granddaughter of the late Admiral Fitch—and was commissioned at Bath, Maine, on 9 October 1982.

This warship was decommissioned on 12 December 1997 and stricken from the Navy's list on 3 May 1999.