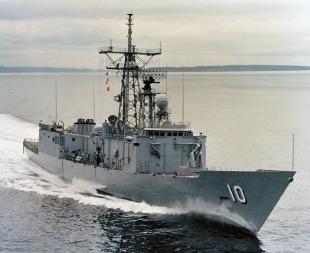 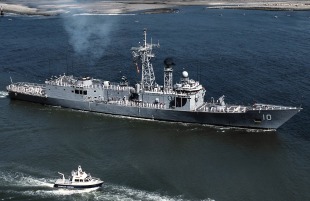 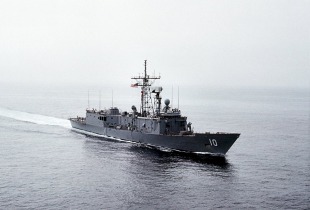 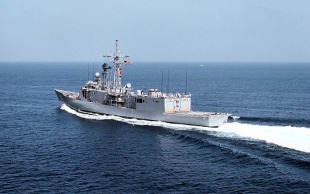 The USS Duncan (FFG-10) was the fourth ship of the Oliver Hazard Perry-class of guided missile frigates, and was named for Vice Admiral Donald B. Duncan (1896–1975). Ordered from Todd Pacific, Seattle, Washington on 27 February 1976 as part of the FY75 program, Duncan was laid down on 29 April 1977, launched on 1 March 1978, and commissioned on 15 May 1980, CDR Ross D. Barker in command. She was frigate short-hull variant (Flight I).

In December 1982, Duncan developed a 40 feet (12 m) fissure in her superstructure during a storm. It was a class design deficiency that occurred on other frigates.

In January 1984, Duncan was transferred to the United States Navy Reserve Fleet and Selected Reserve (SELRES) members provided for a portion of the ship's manning.

Duncan and her crew were awarded the Battle Effectiveness Award five times for 18-month time periods ranging from July 1981 to June 1983 and July 1986 to December 1990.

Duncan participated in Port of Hueneme Harbor Days in October 1992.

In March 1993, sailors aboard Duncan rescued four fisherman from Ecuador who were stranded on their disabled fishing boat in the Pacific Ocean. Duncan towed their boat to safety in Manta, Ecuador. Duncan and her crew were nominated for the Humanitarian Service Medal in March 1993, but no unit award was given.

The Oliver Hazard Perry-class frigate USS Duncan was the first ship of this class to be decommissioned from active service. She was stricken from U.S. Navy service on 05 January 1998. In May 1999 she was sold to the Turkish Navy. She has never entered into service, therefore she doesn’t have a Turkish name. She was used as spare part source, to keep other ships working.