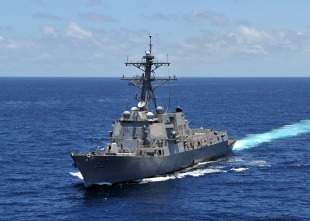 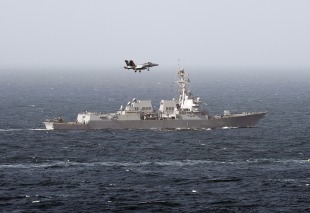 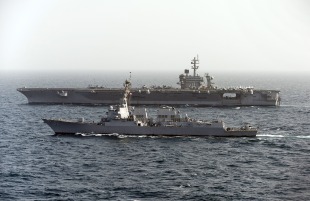 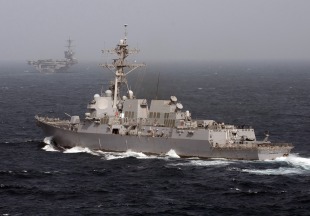 USS Momsen (DDG-92) is an Arleigh Burke-class (Flight IIA) Aegis guided missile destroyer in service with the United States Navy. Momsen is the twenty-sixth destroyer of the Arleigh Burke class to be built by Bath Iron Works. She is named after Vice Admiral Charles B. «Swede» Momsen of Flushing, Queens, New York (1896–1967). Vice Admiral Momsen made many contributions to the navy such as the invention of the Momsen Lung when he was assigned to the Bureau of Construction and Repair. Momsen was also involved in the first successful rescue of a crew of a sunken submarine, USS Squalus, and subsequently supervised the salvage of the boat.

Momsen's keel was laid on 16 November 2001. She was launched on 19 July 2003, sponsored by Admiral Momsen's daughter, Evelyn Momsen Hailey. Momsen was commissioned on 28 August 2004, at Panama City, Florida.

The construction of Momsen and sister ship Chafee, from initial steelcutting to sea trials, was documented on the Discovery Channel television special Destroyer: Forged in Steel. The destroyers were not referenced by name, but their numbers were visible on their prows. As of 2019, Momsen is serving in the Pacific Fleet, homeported in NAVSTA Everett, Washington, and recently assigned to Destroyer Squadron 31 based at Pearl Harbor, Hawaii.