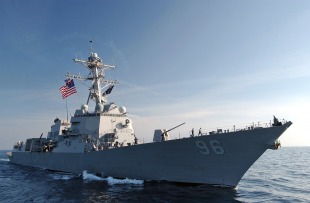 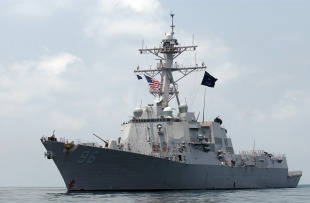 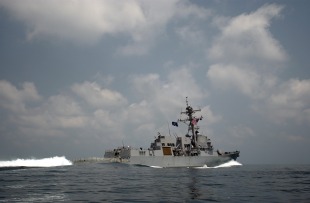 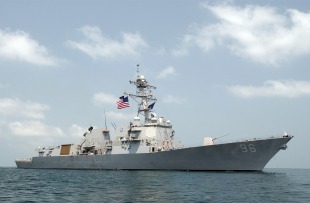 USS Bainbridge (DDG-96) is an Arleigh Burke-class (Flight IIA) Aegis guided missile destroyer in the United States Navy. She is the fifth ship to carry that name, and the 46th destroyer of a planned 75-ship class. Bainbridge is named in honor of Commodore William Bainbridge, who as commander of the frigate USS Constitution distinguished himself in the War of 1812 when he and his crew captured HMS Java, a 38-gun fifth-rate frigate of the Royal Navy.

Since her commissioning in 2005, Bainbridge has been active in the Mediterranean Sea, but most of the attention she has garnered has been as a result of the failed hijacking attempt of the U.S.-flagged freighter MV Maersk Alabama by Somali pirates in April, 2009, which ended with the release of the vessel's master, Captain Richard Phillips, on 12 April 2009. After crewmen of the captured cargo vessel managed to retake the ship, the pirates retreated, taking the ship's master hostage in a lifeboat. Bainbridge, Halyburton, and Boxer shadowed the pirates, and with FBI assistance attempted negotiations for the safe return of the captive captain until U.S. Navy SEAL snipers resolved the situation with deadly force. The story of this incident was turned into the 2013 motion picture titled Captain Phillips, starring Tom Hanks.