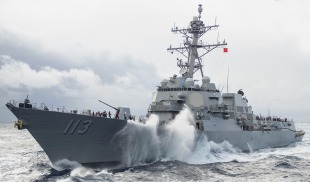 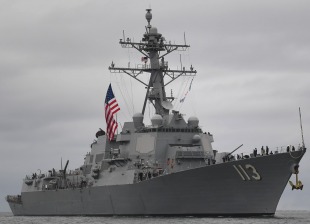 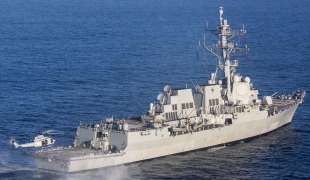 USS John Finn (DDG-113) is an Arleigh Burke-class (Flight IIA Restart) Aegis guided missile destroyer. The contract to build her was awarded to Ingalls Shipbuilding of Pascagoula, Mississippi, on 15 June 2011. Ingalls has been a subsidiary of Huntington Ingalls Industries since its acquisition in April 2001. Prior to the award, Ingalls had constructed 28 Arleigh Burke-class destroyers, the last one of which was USS William P. Lawrence. On 15 February 2011, Secretary of the Navy Ray Mabus announced the ship's name to be John Finn after John William Finn; the names of four other ships were also disclosed.

Finn was the first Medal of Honor recipient of World War II, honored for machine gunning Japanese warplanes for over two hours during the December 1941 attack on Pearl Harbor despite being shot in the foot and shoulder, and suffering numerous shrapnel wounds. He retired as a lieutenant after thirty years of service, and died at age 100 in 2010.

John Finn is the 63rd Arleigh Burke-class destroyer, the first of which, Arleigh Burke, was commissioned in July 1991. With 75 ships planned to be built in total, the class has the longest production run for any U.S. Navy surface combatant. As an Arleigh Burke-class ship, John Finn's roles included anti-aircraft, anti-submarine, and anti-surface warfare, as well as strike operations. During its long production run, the class was built in three flights: Flight I (DDG-51–DDG-71), Flight II (DDG-72–DDG-78), and Flight IIA (DDG-79–DDG-126). John Finn will be a Flight IIA ship, and as such, will feature several improvements in terms of ballistic missile defense, an embarked air wing (two MH-60R Light Airborne Multi-Purpose System helicopters), and the inclusion of mine-detecting ability. DDG-51 was also the first class of ships in the U.S. Navy to include anti-NBC (Nuclear, Biological, and Chemical) warfare protection.