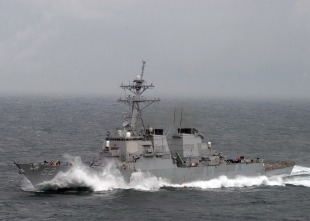 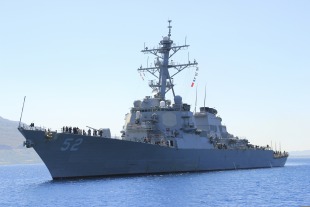 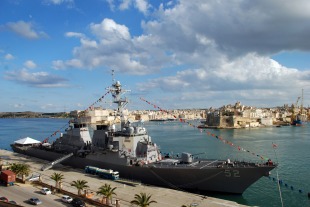 USS Barry (DDG-52) is an Arleigh Burke-class (Flight I) Aegis guided missile destroyer, commissioned in 1992. Barry is the fourth United States Navy ship named after the «Father of the American Navy», Commodore John Barry (1745–1803). Her homeport is Naval Station Yokosuka, Japan. Several improvements over Arleigh Burke exist on this ship and all following Arleigh Burke-class destroyers. They include the ability to refuel a helicopter and several other small improvements.

Barry's keel was laid down on 26 February 1990, at the Ingalls Shipbuilding shipyard in Pascagoula, Mississippi. She was launched on 10 May 1991, and christened on 8 June 1991, by her sponsor Rose Cochran, wife of United States Senator Thad Cochran. Barry was commissioned into the U.S. Atlantic Fleet on 12 December 1992, and was placed under the command of Commander Gary Roughead. The commissioning ceremony took place at Naval Station Pascagoula in Pascagoula, Mississippi.

Barry has received many awards, including the Battenberg Cup for the years 1994, 1996, and 1998—making Barry one of only three ships (as of 2008) to have won the prestigious award three times. She has also been awarded the Battle E award 7 times, and received the Golden Anchor and Silver Anchor Awards for retention. More recently, in 2004 Barry received the Arleigh Burke Fleet Trophy for being the most improved ship in the Atlantic Fleet.