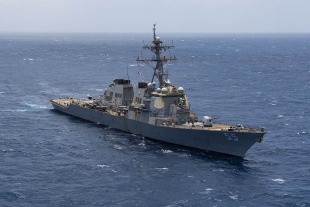 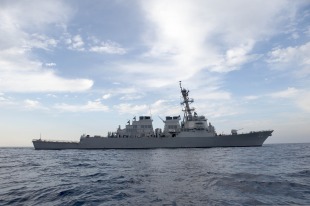 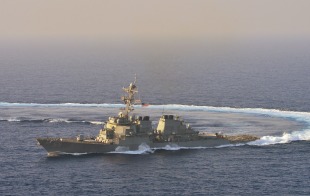 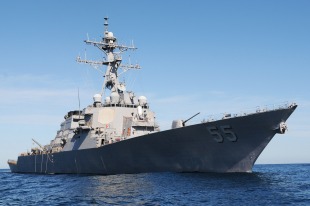 USS Stout (DDG-55) is the fifth Arleigh Burke-class (Flight I) Aegis guided missile destroyer. Built for the United States Navy by Ingalls Shipbuilding, she was commissioned on 13 August 1994 and she is currently home-ported in Naval Station Norfolk. She is part of Destroyer Squadron 26. Stout is named for Rear Admiral Herald F. Stout, who distinguished himself as the Commanding Officer of the destroyer USS Claxton during World War II. In November 1943, Commander Stout received two Navy Crosses in the span of three weeks for his actions in the Pacific. Stout aided Destroyer Squadron 23 in sinking five heavily armed Japanese warships and damaging four others during the Solomon Islands campaign as well as sinking four more Japanese warships and damaging two others to establish a beachhead on Bougainville Island. Stout was ordered on 13 December 1988, the keel was laid down on 8 August 1991, she was launched on 16 October 1992 and commissioned on 13 August 1994. As of July 2020 the ship is part of Destroyer Squadron 26 based out of Naval Station Norfolk.