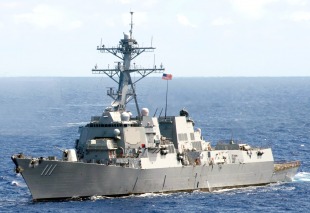 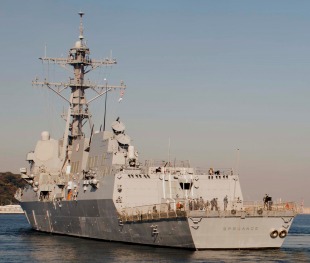 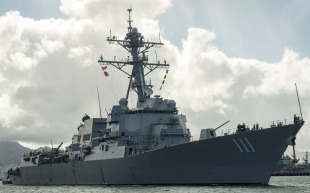 USS Spruance (DDG-111) is a United States Navy Arleigh Burke-class Flight IIA) Aegis guided missile destroyer. She is the 61st ship in her class. Spruance is the second ship to be named for Admiral Raymond A. Spruance (1886–1969), who commanded American naval forces at the Battles of Midway and the Philippine Sea. He was later Ambassador to the Philippines. Her keel was laid down on 14 May 2009. She was christened by the admiral's granddaughter, Ellen Spruance Holscher, on 5 June 2010 in Bath, Maine at Bath Iron Works, where the ship was built at a cost of $1 billion. The completed ship left Bath on 1 September 2011 for her commissioning in Key West, Florida on 1 October 2011.

Spruance was the first of the U.S. Navy's destroyers to be fitted with the Gigabit Ethernet Data Multiplex System (GEDMS), manufactured by the Boeing Company. GEDMS provides an Internet Protocol (IP) based backbone for video and data services on the ship. The bridge features touch screen controls and color readouts instead of gauges.