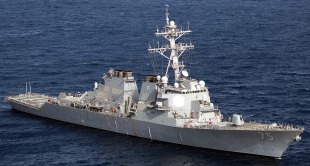 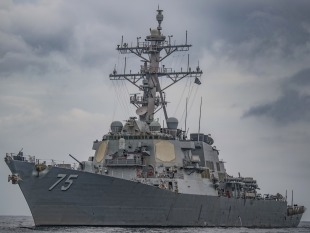 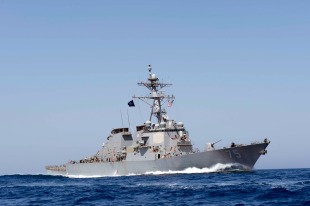 USS Donald Cook (DDG-75) is an Arleigh Burke-class (Flight II) Aegis guided missile destroyer in the United States Navy named for Medal of Honor recipient Donald Cook, a Colonel in the United States Marine Corps. This ship is the 25th destroyer of her class and the 14th of the class to be built at Bath Iron Works in Bath, Maine. Construction began on 9 July 1996, she was launched and christened on 3 May 1997, and on 4 December 1998 she was commissioned at Penn's Landing Pier in Philadelphia, Pennsylvania.

On 16 February 2012, Secretary of the Navy Ray Mabus announced Donald Cook will be one of four ships to be homeported at Naval Station Rota, Spain. It was announced in January 2014 that the ship would arrive there in mid-February 2014. In Rota she forms part of Destroyer Squadron 60.

On 12 November 2009, the Missile Defense Agency announced that Donald Cook would be upgraded during fiscal 2012 to RIM-161 Standard Missile 3 (SM-3) capability in order to function as part of the Aegis Ballistic Missile Defense System.

In 2016, four destroyers patrolling with the U.S. 6th Fleet based in Naval Station Rota, Spain, including Donald Cook received self-protection upgrades, replacing the aft Phalanx CIWS 20mm Vulcan cannon with the SeaRAM 11-cell RIM-116 Rolling Airframe Missile launcher. The SeaRam uses the same sensor dome as the Phalanx. This was the first time the close-range ship defense system was paired with an Aegis ship. All four ships to receive the upgrade were either Flight I or II, meaning they originally had two Phalanx CIWS systems when launched.