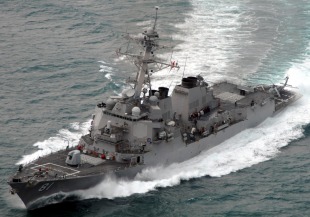 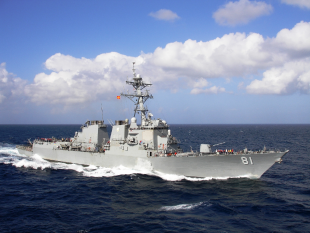 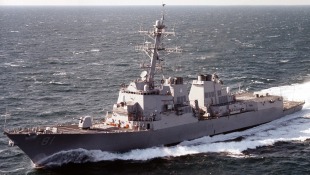 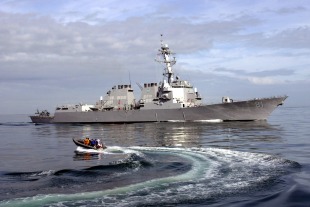 USS Winston S. Churchill (DDG-81) is an Arleigh Burke-class (Flight IIA) Aegis guided missile destroyer of the United States Navy. She is named after Sir Winston Churchill, former Prime Minister of the United Kingdom. This ship is the 31st destroyer of her class. Winston S. Churchill was the 18th ship of this class to be built at Bath Iron Works in Bath, Maine, and construction began on 7 May 1998. She was launched and christened on 17 April 1999. On 10 March 2001, she was commissioned during a ceremony at Town Point Park in Norfolk, Virginia.

The ship is the first of the Flight IIA variants fitted with the 62-caliber Mark 45 Mod 4 naval gun system. The guns' longer barrels allow more complete combustion of the propellant, reducing barrel flare and improving projectile velocity and firepower against ship and shore targets; additionally, the Mk 45 mod 4 uses a modified gun-house, designed to reduce its radar signature. Winston S. Churchill is armed with Tomahawk, Standard and ASROC (VLA) missiles.

The vessel additionally contains two hangars, not present in earlier destroyers; these can house Light Airborne Multi-Purpose System (LAMPS) Sikorsky SH-60B or MH-60R Seahawk helicopters. These LAMPS can be fitted with air-to-surface missiles for surface ship attacks, and torpedoes for submarine attacks.

The ship is also fitted with the AN/SPY-1D phased array radar—this represents a significant advancement in the detection capabilities of the Aegis weapon system and provides enhanced resistance to electronic countermeasures. The radar can guide more than one hundred missiles at once to targets as far as 600 nautical miles (1,100 km; 690 mi).