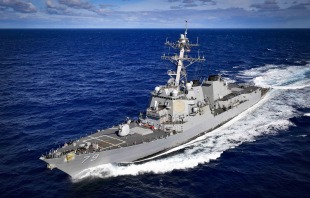 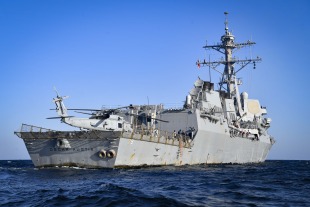 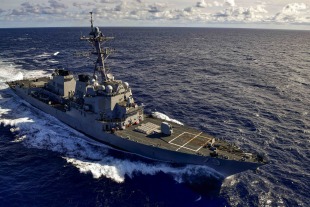 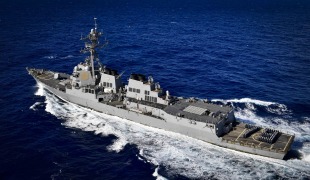 USS Oscar Austin (DDG-79) is an Arleigh Burke-class (Flight IIA) Aegis guided missile destroyer in the United States Navy. Oscar Austin is named for Medal of Honor and Purple Heart recipient Private First Class Oscar P. Austin. This ship is the 29th destroyer of her class. USS Oscar Austin was the 17th ship of this class to be built by Bath Iron Works in Bath, Maine, and construction began on 9 October 1997. She was launched and christened on 7 November 1998. On 19 August 2000 she was commissioned at Bath, Maine. As of July 2021 the ship is part of Destroyer Squadron 2 based out of Naval Station Norfolk.

USS Oscar Austin is the first ship of the Flight IIA subclass of the Arleigh Burke-class destroyer. Compared to previous Burkes, Flight IIAs are 4 feet 6 inches (1.37 m) longer, displace about 900 tons more, carry six more Vertical Launching System cells, and have a hangar that can house two SH-60 Seahawk helicopters. To prevent the additional superstructure aft from fouling radar returns, the rear-facing SPY-1D panels are one deck higher. She is one of two Flight IIA ships using the older 5-inch/54 caliber naval gun, the other being USS Roosevelt (DDG-80), which cannot use certain advanced munitions that require the longer 5 in/62 caliber gun mounted on succeeding ships of the class like the USS Winston S. Churchill.