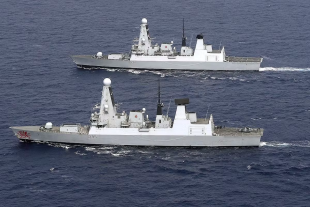 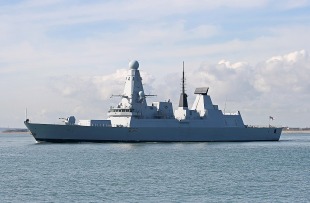 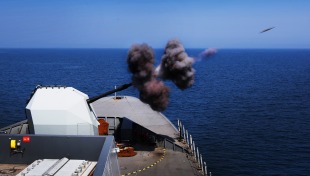 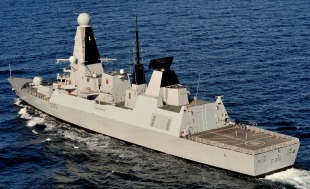 The Type 45 destroyer, also known as the D or Daring class, is a class of six guided missile destroyers built for the United Kingdom's Royal Navy in the early 21st century. The class is primarily designed for anti-aircraft and anti-missile warfare and is built around the PAAMS (Sea Viper) air-defence system utilising the SAMPSON Active electronically scanned array (AESA) and the S1850M long-range radars. The first three destroyers were assembled by BAE Systems Surface Fleet Solutions from partially prefabricated «blocks» built at different shipyards; the remaining three were built by BAE Systems Maritime – Naval Ships. The first ship in the Daring class, HMS Daring, was launched on 1 February 2006 and commissioned on 23 July 2009.

The UK had sought to procure a new class of air-defence guided-missile destroyers in collaboration with seven other NATO nations under the NFR-90 project; the project collapsed due to varying requirements of the different countries involved. The UK then joined France and Italy in the Horizon-class frigate programme; however, differing national requirements, workshare arguments and delays led to the UK withdrawing on 26 April 1999 and starting its own national project. On 23 November 1999 Marconi Electronic Systems (MES) was confirmed as prime contractor for the Type 45 project. Seven days later MES and British Aerospace merged to form BAE Systems (BAE), making the latter the prime contractor.

The Type 45 project has been criticized for rising costs and delays, with the six ships costing £6.46 billion, an increase of £1.5 billion (29%) on the original budget. The first ship entered service in 2010, rather than 2007 as initially planned. In 2007, the Defence Select Committee expressed its disappointment that the Ministry of Defence (MOD) and BAE had failed to control rising costs.

The Type 45 destroyers take advantage of some Horizon development work and use the Sea Viper air-defence system and the SAMPSON radar. The ships were built by BAE Systems Maritime – Naval Ships, which subsequently became BVT Surface Fleet with the merger of the surface shipbuilding arms of BAE Systems and VT Group. These two companies had previously built the ships in collaboration.

The Type 45 destroyers are 152.4 m (500 ft 0 in) in length, with a beam of 21.2 m (69 ft 7 in), a draught of 7.4 m (24 ft 3 in) and a displacement of approximately 8,500 tonnes (8,400 long tons). This makes them significantly larger than the Type 42 they replace (displacement 5,200 tonnes, 5,100 long tons, 5,700 short tons). The Type 45 destroyers are the first British warships built to meet the Lloyd's Register's Naval Ship Rules for hull structure requiring design approval by Lloyd's Register for the principal structural arrangements of the vessel. BAE Systems is the Design Authority for the Type 45, a role traditionally held by the Ministry of Defence. The design of the Type 45 brings new levels of radar signature reduction to the Royal Navy. Deck equipment and life rafts are concealed behind the ship's superstructure panels, producing a very «clean» superstructure, somewhat similar to that of the French La Fayette-class frigates. The mast is also sparingly equipped externally. Speculation by the press suggests that this design gives the ship the radar cross-section of a small fishing boat.

The Daring class is notable for being the first Royal Navy vessels to include gender-neutral living spaces to accommodate male and female crew members; communal shower and heads facilities have given way to individual cubicles, and six-person berths for junior ratings are far more flexible in accommodating a mixture of male and female sailors. Men and women will continue to sleep in separate spaces, in common with most other navies.

Placing the electric motors closer to the propeller, shortening the shaft line and removing the need for a gearbox or controllable pitch propellers, and reducing exposure to action damage.

Ability to arrange machinery in more convenient locations away from the shaftline, reducing space lost to funnels, and improving access for maintenance.

Flexibility in running propulsion and ship services from any combination of prime movers reducing engine running hours and emissions.

Ability to distribute prime mover power between services and propulsion can accommodate future increases in service and weapon loads with minimal impact on ship speed or prime movers.

The key to the efficient use of a single prime mover is the choice of a gas turbine that provides efficiency over a large load range; the WR-21 gas turbine incorporates compressor intercooling and exhaust heat recovery, making it significantly more efficient than previous marine gas turbines, especially at low and medium load. The combination of greater efficiency and high fuel capacity gives an endurance of 7,000 nautical miles (13,000 km) at 18 knots (33 km/h). High power density and the hydrodynamic efficiency of a longer hull form allow high speeds to be sustained. It has been reported that Daring reached her design speed of 29 knots (54 km/h) in 70 seconds and achieved a speed of 31.5 knots (58 km/h) in 120 seconds during sea trials in August 2007.

The Type 45 destroyers are primarily designed for anti-air warfare with the capability to defend against targets such as fighter aircraft and drones as well as highly maneuverable sea skimming anti-ship missiles travelling at supersonic speeds. The Royal Navy describes the destroyers' mission as being «to shield the Fleet from air attack».

The Type 45 destroyer is equipped with the Sea Viper (PAAMS) air-defence system utilising the SAMPSON active electronically scanned array multi-function radar and the S1850M long-range radar. PAAMS is able to track over 2,000 targets and simultaneously control and coordinate multiple missiles in the air at once, allowing a large number of tracks to be intercepted and destroyed at any given time. This makes it particularly difficult to swamp PAAMS during a saturation attack, even if the attacking elements are supersonic. The US Naval War College has suggested that the SAMPSON radar is capable of tracking 1,000 objects the size of a cricket ball travelling at three times the speed of sound (Mach 3), emphasising the system's capabilities against high performance stealth targets.

A core component of PAAMS is the Aster missile, in particular Aster 15 and Aster 30. MBDA describes Aster as a «hit-to-kill» anti-missile missile capable of intercepting all types of high performance air threats at a maximum range of 120 km. The Aster missile is autonomously guided and equipped with an active RF seeker enabling it to cope with «saturated attacks» thanks to a «multiple engagement capability» and a «high rate of fire». Presently the Daring-class destroyers are equipped with a 48-cell A50 Sylver Vertical Launching System allowing for a mix of up to 48 Aster 15 and 30 missiles.

In May 2022, the Ministry of Defence announced that the Royal Navy's Type 45 destroyers would be upgraded with a ballistic missile defence capability. As part of this upgrade, which is named the Sea Viper Evolution programme, the six ships will be equipped with ASTER 30 Block 1 missiles and will receive upgrades to their SAMPSON radars and Sea Viper command and control systems.

The entire class is based at HMNB Portsmouth. All ships were built by BAE Systems Surface Ships.

The Type 45 destroyers were built to replace the Type 42 (Sheffield-class) destroyers that had served during the Falklands War, with the last Type 42 being decommissioned in 2013.

Under current plans, the Type 45 destroyer will be replaced by the Type 83 destroyer, the first of which is expected to enter service in the late 2030s.

Only three ships of the Type 45 Daring class carry the same names as members of the previous Daring-class destroyers of 1949; these are: Daring, Diamond and Defender. These names had been used for the D-class destroyers of the 1930s, with the addition of Duncan, which was also one of the Type 14 frigates in the 1950s. The remaining Type 45 names, Dauntless and Dragon, were previously carried by D-class cruisers of 1918, which served until 1945.

In December 2020 the Minister for Defence Procurement, Jeremy Quin, indicated that under current plans the Type 45 destroyers would be decommissioned between 2035 and 2038.