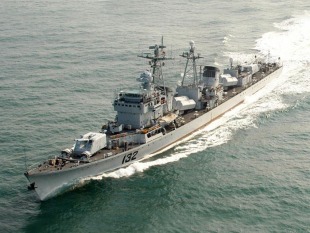 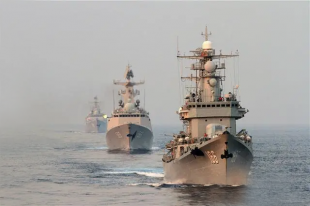 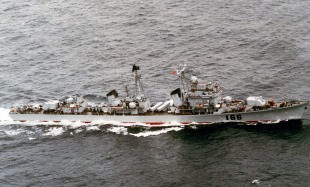 The PLAN began designing a warship armed with guided missiles in 1960 based on the Soviet destroyer Neustrashimy, with features from the Kotlin-class destroyer, but the Sino-Soviet split stopped work. Work resumed in 1965 with nine ships being ordered. Construction started in 1968, with trials beginning in 1971. The ships nominally entered service in the early 1970s, but few were fully operational before 1985; workmanship was poor due to the Cultural Revolution.

Construction of the second batch began in 1977, with the last commissioning in 1991. The second batch may have been ordered due to the Cultural Revolution disrupting development of a successor class. These ships may be designated Type 051D.

The PLAN initiated an abortive modernization program for the first batch in 1982. The ships would be reconstructed with British weapons and sensors acquired from British Aerospace. The Falklands War made the prospective upgrades less impressive and cost effective, and the project was cancelled in 1984. A 1986 upgrade project using American power plants, weapons, sensors, and computers was cancelled because of the 1989 Tiananmen Square protests.

Jinan, the first of class, became a trials ship in 1987; a helicopter hangar and flight deck replaced the rear armament. This configuration was referred to as Luda II.

The last two ships, Zhanjiang and Zhuhai, were upgraded with foreign — mainly French — systems, possibly being designated as Type 051G, and referred to as Luda III. They became test beds and many of the systems were later employed on the Type 052 and Type 051B destroyers. Both ships were decommissioned on 3 September 2020, being the last of their class to retire from service.

The Type 051DT was part of the Luda III class, and later the Luda IV class.

The Type 051Z was a command variant with the ZKJ-1 combat data system. Anti-aircraft warfare capabilities were improved by replacing the 37 mm guns with Soviet 57 mm (2.2 in) guns, and fitting modern Type 381A 3-D radar. One Type 051D, Hefei, was converted to a Type 051Z.

The Luda II was a helicopter destroyer. The gun turrets abaft the aft missile launcher was replaced by a hangar and flight deck for two Harbin Z-9C helicopters.

The Type 051G was an improved variant that the last two ships, Zhanjiang and Zhuhai, were completed to. They were equipped with Type 354 3-D air and surface search radar. Four twin YJ-8 launchers replaced the HY-1/HY-2 launchers. The Soviet sonar was replaced by French DUBV-23 search sonar and DUBV-43 variable depth sonar (VDS). Zhuhai was modified in 1999. The Soviet 130 mm guns were replaced by Type 79A 100 mm (4 in) guns, derived from French Creusot-Loire Compact, with automated reloaders. An HQ-7 SAM launcher replaced the «X» turret, as on the Type 051DT. Zhuhai was similarly modified. Zhanjiang and Zhuhai were equipped with the ZKG-4A and ZKG-4B combat data systems respectively. The Type 051G was also the first Chinese ship to deploy the YU-7 lightweight torpedo, and the Italian 40 mm (1.6 in) anti-aircraft gun.

The Type 051G was part of the Luda III class, and later the Luda IV class. 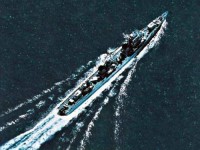 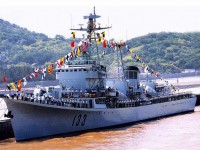