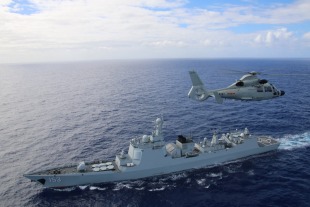 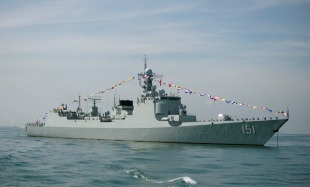 The first two ships, Lanzhou and Haikou, were laid down at the Jiangnan Shipyard in Shanghai in 2002, and entered service in 2004 and 2005 respectively. No new ships were laid down until 2010; the pause may have been due to the relocation of the shipyard.

The Type 052C appears to share the same basic hull design as the Type 052B destroyer, which in turn is based on the Type 051B destroyer. Stealth features are incorporated.

The Type 052C carries 48 HHQ-9 naval surface-to-air missiles (SAM), each with a range of 55 nautical miles (102 km; 63 mi). The SAMs are cold launched from eight revolver-type vertical launchers, with six missiles per launcher.

Eight YJ-62 anti-ship missiles are carried in two quad-canister launchers just forward of the hangar. Each missile has a range of 150 nautical miles (280 km; 170 mi).

The main gun is a 100 mm (4 in) PJ-87. The gun suffered from jamming and may have influenced the decision to adopt a different weapon for the Type 052D destroyer. The weapon has a rate of fire of 25 rounds per minute.

Close-in defence is provided by two seven-barrel 30 mm (1.2 in) Type 730 CIWS, one mounted forward of the bridge and one atop the hangar. Each gun has a maximum rate of fire of 4200 rounds per minute.

Two triple 324 mm (13 in) torpedo tubes are carried; these are copies or derivatives of the Whitehead Alenia Sistemi Subacquei B515/ILAS-3. This launcher may fire the Yu-7 ASW torpedo.

The Type 052C is the first PLAN warship to mount the G-band Type 346 AESA radar. The four phased array antennas are mounted on the taller forward superstructure. The Type 346 is used for air search, and provides fire control for the HHQ-9. The combination of AESA radar and VLS SAMs produces a marked increase in anti-aircraft firepower over previous Chinese warships.

A Kamov Ka-28 or Harbin Z-9 helicopter may operate from the rear hangar and flight deck. The Ka-28 is equipped with a search radar and dipping sonar and can also employ sonobuoys, torpedoes, depth charges, or mines. The Z-9 is a variant of the Airbus Helicopters AS365 Dauphin. The naval variant of the Z-9, the Z-9C, is equipped with the KLC-1 search radar, dipping sonar, and is typically armed with a single, lightweight torpedo. Either helicopter significantly improves the anti-submarine capabilities of the Type 052C.

The DA80s had blade problems and may have contributed to the last two Type 052Cs sitting pierside at the shipyard for two years without being accepted by the PLAN.