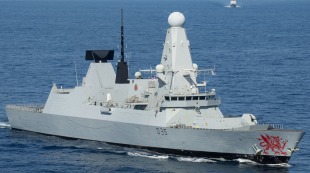 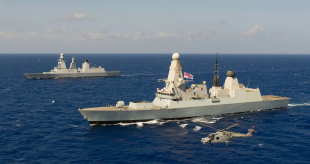 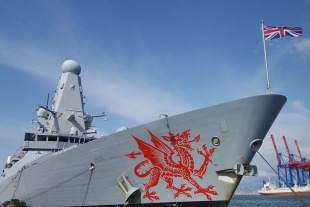 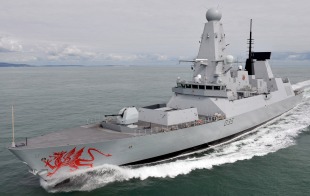 HMS Dragon is the fourth ship of the Type 45 or Daring-class air-defence destroyers built for the Royal Navy. She was launched in November 2008 and commissioned on 20 April 2012.

Dragon's construction began at the then BAE Systems Naval Ships (later BAE Systems Surface Fleet Solutions) yard at Scotstoun on the River Clyde in December 2005, and by December 2007 the bow section was in place on the Govan slipway for mating with the other modules. Dragon launched from the slipway at Govan on 17 November 2008 at 3:00pm. Her sponsor was Mrs Susie Boissier, wife of Vice Admiral Paul Boissier, Deputy Commander-in-Chief Fleet and Chief of Staff. She was fitted out at Scotstoun.

Dragon features a red Welsh Dragon on each side of her bow, the only Royal Navy ship to be adorned in this way. The dragons were there when she was launched, but were removed in a 2011 refit. They were restored in 2016 following a fundraising campaign led by the British Warships Association.