The H.M.S. (His Majesty's Ship) BELLONA was one of the most famous 74-gun ships of the British Navy.

The 74-gun ship formed the backbone of the principal naval powers of Europe from the Seven Years War (1756 — 1763) until the end of the Napoleonic Wars (1815). In fact, compared with the less-armed lower classes, and the 80-gun ships, structurally unstable, the 74s were considered the ideal compromise between gun power and maneuverability. Launched from the French shipyards in the 1730s, the first 74-gun vessels, although structurally weak (like many of the ships built in France at that time), immediately showed their superiority in comparison with the British ships then employed in similar operative roles.

After the capture of several French 74s during the two Battles of Finisterre in 1747, the British Admiralty began in 1755, under the Surveyor Thomas Slade, the construction of the first ships of that type, the Dublin class. Three more ships, the Hero, Hercules and Thunder, were ordered the following year.

The sailing ship BELLONA, together with the Dragon and Superb, was commissioned on 28 December 1757; Slade's draught was produced on 31 January 1758. The construction of the BELLONA began at Chatham shipyards in the same year, on 10 May. The sailing ship BELLONA, launched on 19 February 1760, sailed, on 8 April, to join the battle fleet which was then blockading Brest. In May 1761 she was detached to patrol off the River Tagus; on 13 August at 3pm, the BELLONA, in the company of the frigate Brilliant, sighted a small French squadron, constituted by the 74-gun ship Courageous and the frigates Malicious and Hermione. After a long chase, the following morning at 5 the BELLONA reached the Courageous and fought it, while the Brilliant engaged the two frigates. Two hours later, the Courageous, owing to the terrible damages suffered, struck her colors; severely damaged, neither of the British ships was in any condition to pursue the two frigates, so they were able to make good their escape. 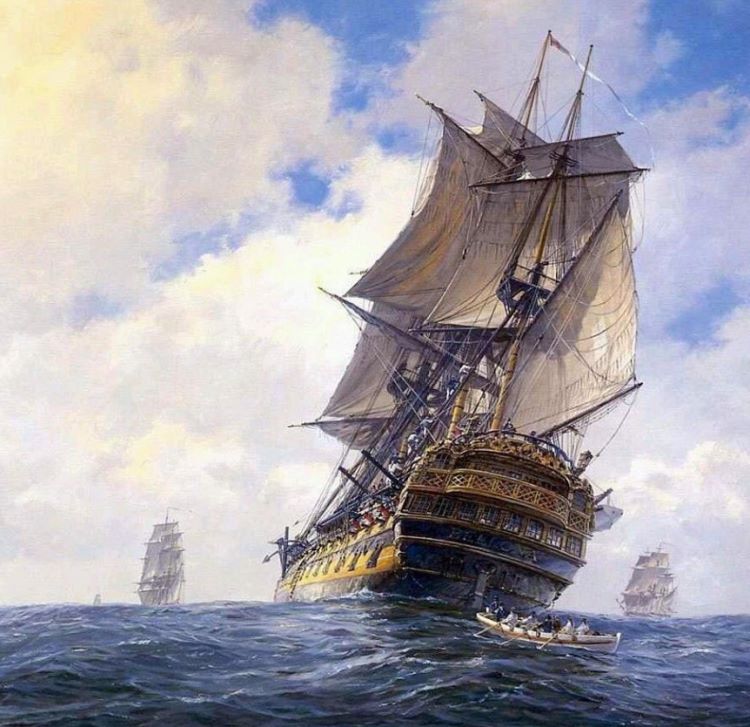 Having been properly repaired, the BELLONA was fitted as a guard ship at Portsmouth until 1770; in 1771 she sailed to Chatham; there, she was laid up in ordinary, with guns and rigging removed, until 1778, when she was docked and began a major repair. Particularly, the poopdeck bulwark was modified: 6 short-barrel guns of new conception, the first carronades, were fitted on it. In March 1780, her bottom was coppered for the first time.

In the same year, on 30 December, the sailing ship BELLONA took part in the capture of the 44-gun Dutch ship Princess Caroline; then she cruised off Gibraltar, in the North Sea and the West Indies. From 1783 to 1791 she was laid up at Portsmouth again; after further repairs at Chatham, in 1793 she joined Admiral Howe's fleet in the Channel. Until 1797 the sailing ship BELLONA operated in the West Indies again, against the French fleet, and in the Baltic; in 1801 she could take no part in the Battle of Copenhagen, because she was grounded just outside the scene of the action. She was employed in the blockade of Cadiz; then, the BELLONA was at Jamaica, at Portsmouth again and at Barbados. In 1806 she took part in the chase of the Foudroyant and the destruction of the 74-gun Impetueux, both French ships. Although more than 50 years from her launch were passed, the sailing ship BELLONA served in the Navy until February 1814; she was broken up at Chatham in September 1814.

At least, two period models of the BELLONA are preserved; the models, both of which without masts, are different in many particulars: the oldest shows the framework, while the second, built approximately in 1778, presents the bottom covered with copper sheaths, and it was probably produced for King George III, in order to illustrate that innovation.